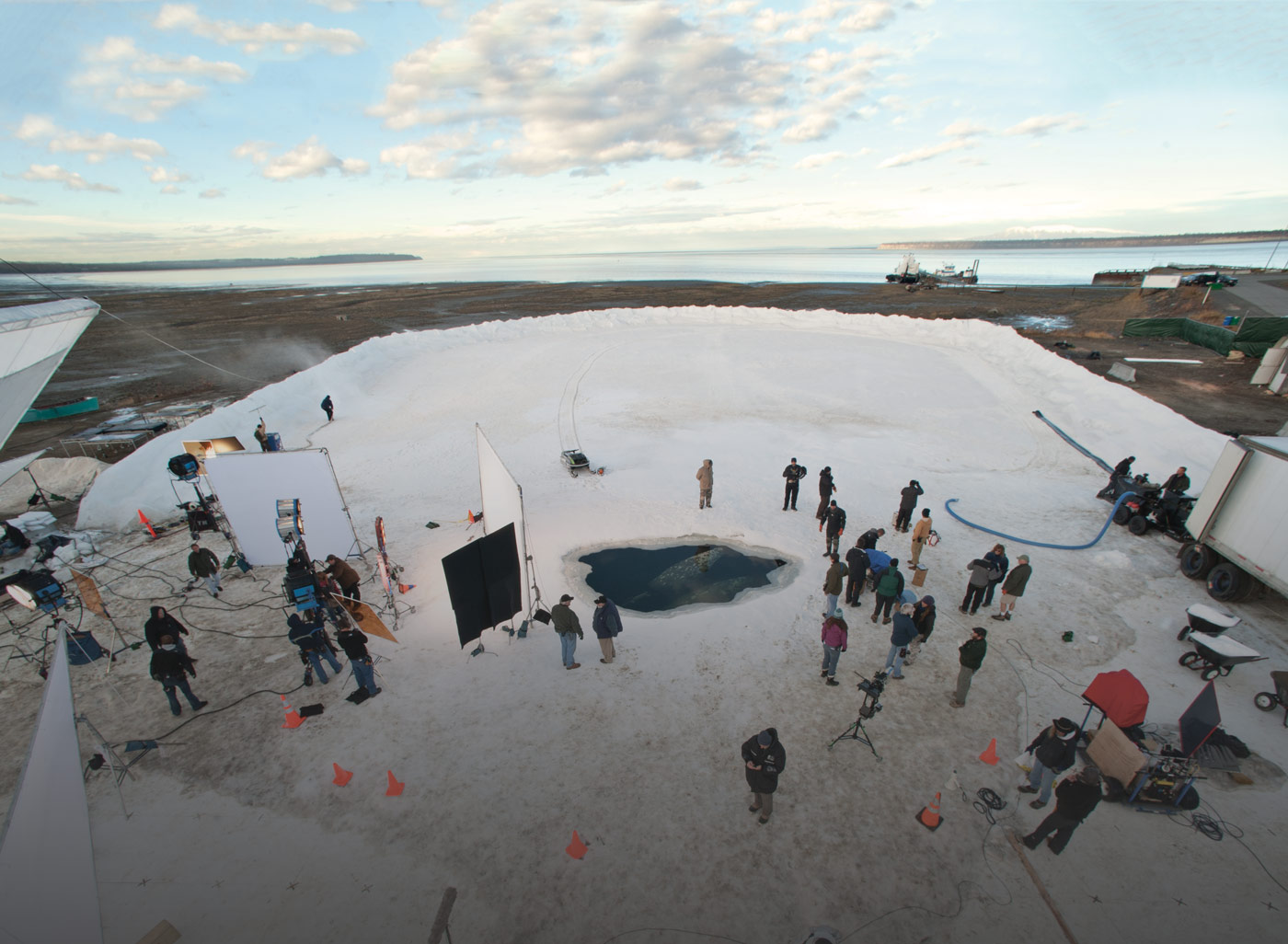 When director Ken Kwapis first gave John Bailey, ASC the script for Big Miracle, back in autumn of 2009, Bailey found the story engaging. He also looked forward to having an opportunity to shoot another film with Kwapis at the helm. The pair had previously collaborated on The Sisterhood of the Traveling Pants (2005), License to Wed (2007) and He’s Just Not Into You (2009). When the studio set to produce Big Miracle dropped out, Bailey moved on to other work, including a family film (Ramona and Beezus) drawn from Beverly Cleary’s popular children’s book series and Country Strong, the second feature from director Shana Feste, for whom Bailey had shot a Grand Jury Prize–nominated Sundance film (The Greatest). A short list of Bailey’s other memorable credits includes Ordinary People, American Gigolo, Silverado, The Big Chill, Brighton Beach Memoirs, The Accidental Tourist and In the Line of Fire. When Working Title Films and Anonymous Content committed to producing Big Miracle in late 2010, the project shifted back into high gear and Universal Pictures signed on to release.

The script for Big Miracle was based on a real-life drama that happened near Point Barrow, Alaska during the winter of 1988. Three gray whales were trapped under the ice covering the Chukchi Sea off the coast in the northernmost part of the state. A dim twilight with dark clouds painted the sky, and temperatures were well below freezing with frequent rain and snowstorms. Despite the daunting environment, a few citizens and members of an Inupiat Eskimo tribe made a valiant and ultimately successful attempt to save the whales.

“This isn’t a simple, straight-line drama,” Bailey describes. “It’s a complex story with many intersecting and conflicting human agendas and natural forces.”

Bailey says he drew on his memories of a movie that he worked on in Alaska during the dawn of his career in 1969. He was a camera assistant on Tracks of the Snow Bear, a 16-mm film produced in Barrow for a Walt Disney television series.

“I was there for about four months, during late winter, spring and early summer,” he recalls. “Point Barrow was a remote village at that time. All the roads were dirt and there were no facilities for visitors in the town of Barrow. We stayed in Quonset huts at the Naval Arctic Research Laboratory about five miles north of town. In good weather, I would walk up to Point Barrow at the tip of the landmass. The Chukchi Sea was on one side and the Beaufort Sea on the other side. There was nothing in front or on either side of me other than water!”

Deep and lasting memories of that experience helped Bailey pre-visualize the visual grammar for Big Miracle, as well as anticipate some of the practical challenges.

“One of the early decisions that Ken had to make was where to shoot the film,” Bailey recalls. “The story takes place on the North Slope near Barrow, which is just a few feet above sea level. There are no trees, no shrubbery and the tundra, except for a few summer months, is covered with snow. When the Chukchi Sea is frozen, there is no demarcation line between land and sea.”

Kwapis and the producers decided that location wasn’t feasible because of the weather, the lack of adequate air service and too few facilities for housing the cast and crew.

“Ken chose an area at Anchorage harbor that is surrounded on three sides by the city and mountains,” Bailey continues. “The open ocean is on the fourth side.”

“John Heller was with us for the duration of production,” Bailey adds. “The set was modular to correspond with the ever-changing dimensions of the ice field. A high ridge at the end of the set helped hide the horizon line of the open sea. It was extended and blended by CGI.”

Both Kwapis and Bailey agreed Big Miracle should be shot in wide-screen 2.40:1 aspect ratio in order to capture the scope, depth and tactile feeling of the environment. They discussed going native anamorphic, but decided that three-perf Super 35 was more practical, given the remoteness of the locations.

“We knew that we would be covering scenes with two or three cameras from different angles, because the daylight hours were so short,” Bailey says. “We also anticipated that there would be many shots with multiple green screens in their backgrounds.”

Matt Szundy, a local scout, guided Bailey and Kwapis to potential locations during preproduction. They also studied archived news film of the efforts to save the whales in October 1988 at the CBS-TV affiliate in Anchorage, and at the Alaska Film Archives.

“The efforts to rescue the whales happened more than 20 years ago, but it is still like yesterday in the memories of many of the older Inupiats,” Bailey says.

Kristen Bell, Drew Barrymore, John Krasinski, Rob Riggle and Ted Danson were cast in leading roles.  Bailey brought most of his crew from Los Angeles and New York, including Matt Moriarty, who was the principal A-camera/Steadicam operator. Jim McConkey, SOC stepped into the breach in both roles when Moriarty had to leave for a prior commitment. Andy Shuttlesworth was also a camera and Steadicam operator for the entire shoot. Steve Cueva, Dennis Seawright, Jozo Zovko and Haydn Pazanti were the camera assistants.

“I feel privileged to have worked with three of the most artistic Steadicam operators in the business on the same film,” says Bailey, who also praises the contributions of gaffer Mike Moyer and key grip Art Bartels.”

Peter Collister, ASC directed and shot a week of second-unit work in Barrow. Operator Steven Rychetnik, who was familiar with the terrain from his work on local documentaries, worked with Collister, who recalls only having met Bailey once (at a film preservation seminar) before getting the assignment. The next time we met was on a charter flight from Anchorage to Barrow, where around 75 percent of the film is supposed to take place,” Collister says. “John had tears in his eyes when he saw the light in Barrow. I remember him saying that he was going to figure out how to recreate those colors and feeling while shooting scenes in Anchorage. When we began production in Barrow, we only had five hours and 15 minutes of daylight. Two weeks later there was perpetual night. When John saw our first dailies, he told me, this is the way I’m going to make the rest of the film look.”

The exposed negatives were shipped to FotoKem in Burbank. The lab provided high-definition digital dailies. A projection room was set up in an office at the Anchorage Daily News. About 25 people, including Kwapis, Bailey, editor Cara Silverman, the producers, the camera and sound crews, gaffer, ADs and Heller were usually at dailies.

“That was important, because we were seeing the day’s work all at the same time, projected onto a fairly big screen,” Bailey describes. “It was a collective, collaborative experience, which is very different than looking at dailies on your computer alone in your hotel room at night.”

Bailey stresses that it wasn’t just about seeing if the images looked right. It was also about the shared creative experience and the emotions it evoked.

“Ken and I tried to make the natural environment’s beauty and severity characters in the story, while also giving the audience a sense of being there on the ice, in the austerity of the setting,” he says. “The camera is meant to be very much inside the action without resorting to a documentary style. The Steadicams allowed us to work in close and gave us more freedom to move around with the staging. Our goal was to give the audience a sense of being there, so they feel connected to the drama.”

The Alaska Film Commission closed down streets in downtown Anchorage so period cars could be used to create a sense of flowing traffic. The Film Commission also helped arrange access to locations, including a hotel and the offices of a former governor.

“Shots in restaurants, hotels and places like that were generally on dollies,” Bailey adds. “We also dollied over ice and employed a crane with a camera operator, rather than a remote head, because I was concerned about the reliability of electronics in the cold, wet weather. The sleet and frozen rain were so bad at times that my light meter stopped working. We prayed for a gentle, benign snowfall.”

Production ran from mid-September until the end of the first week of December 2010. The temperature was sometimes around 10 degrees in the first morning light. It hovered in the low to mid-20s during the day.

“The sun never got higher than about 24 degrees, so it was always a beautiful raking light,” Bailey says. “Sometimes we would start a sequence in soft sunlight and then clouds moved in. When that happened, we used a battery of 18Ks to light the foreground and middle ground to simulate low, soft sunlight.”

A climactic sequence begins when a Russian icebreaker joins the rescue effort by breaking through the ice ridges that were sometimes 25 to 30 feet high.

“The Russians had to cut through that ice in order to create the path for the whales to escape,” Bailey says. “The Inupiats also cut hundreds of holes in the ice so the whales could breathe as they moved toward the open water.”

The icebreaker sequence was largely visual effects created by Heller and his team using a 20-foot model of the Russian icebreaker that was filmed in a tank in Northern California.

In one scene, the character played by Drew Barrymore sees that the smallest baby whale, named Bam Bam, has a plastic net tangled around its fluke. She puts on a wet suit, dives into the icy ocean and cuts the net away. Underwater cinematographer Pete Romano flew to Alaska to shoot that scene with a double for Barrymore in a large aquarium tank.

The weather was unpredictable. They began shooting with heavy cloud cover. Suddenly, there was a break in the clouds and bright sunshine flooded the scene. The crew quickly responded by using silks on cranes to diffuse the sunlight.

Kwapis convinced the producers to have Bailey on the payroll for a week during DI timing at Technicolor Hollywood. Bailey and colorist Adrian Seery balanced sequences shot to shot while creating a variety of looks in the sky. “We did a DI because there are so many visual-effects shots,” Bailey says. “Our original hope was to do it at 4K resolution, but the number of VFX shots grew steadily larger, so everything was done at 2K.  Of course, it would take a 6K to 8K scan to get all of the picture information inherent on the film negative, but that’s a different story. One that involves the trade-off of degrading your images for the sake of the added control you have with the DI. Unfortunately that lower resolution 2K DI becomes your master record for all time.”

Which, Bailey adds, is a battle to be fought another day.