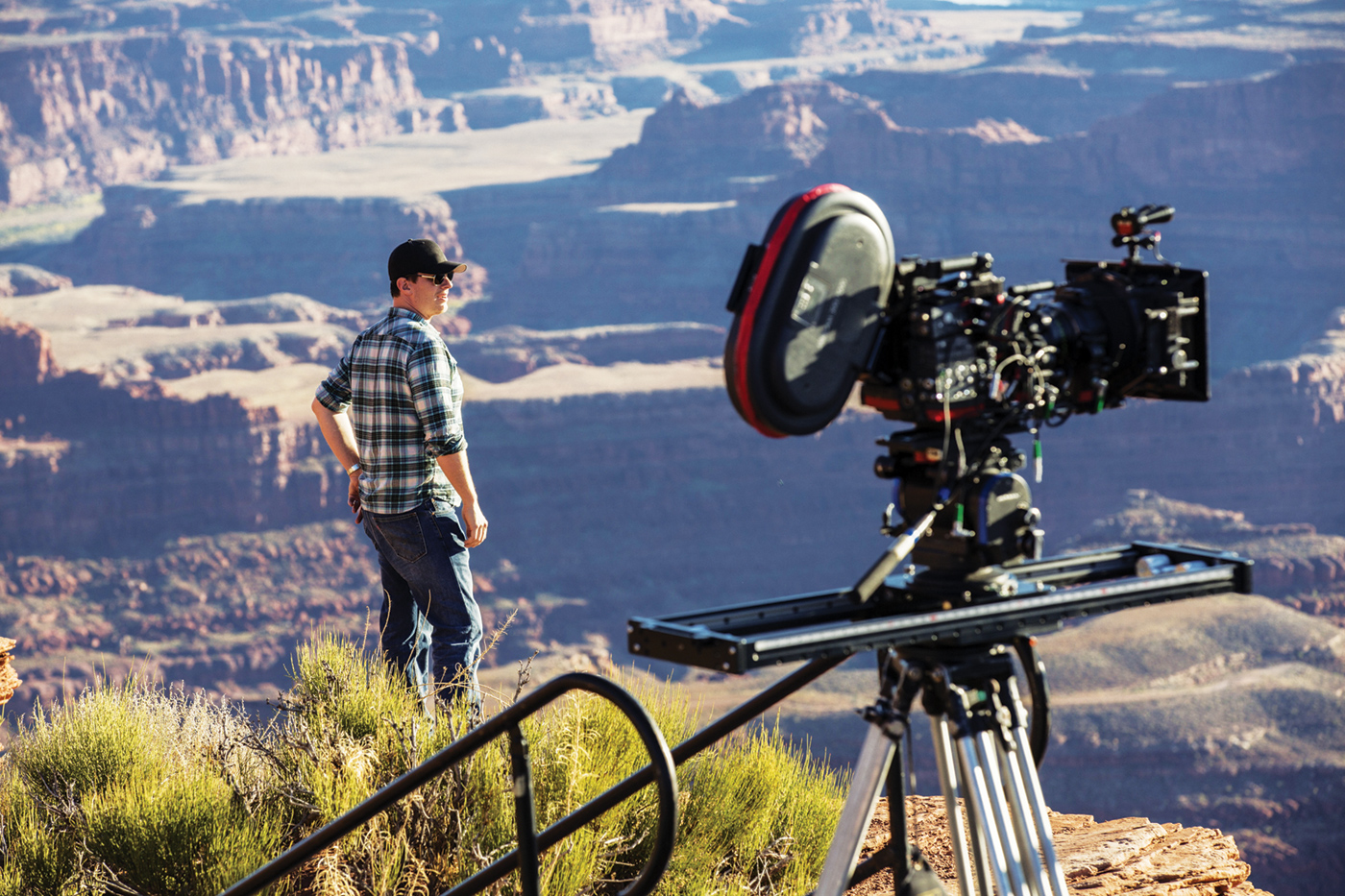 Jonathan Nolan has film in his blood. His older brother, Chris, is known for a total and complete commitment to shooting celluloid, something “Jonah,” as he is known, has found ingrained in his psyche as a producer and director as well. Having written/co-written his brother’s acclaimed and hugely successful features, including Interstellar, The Dark Knight and The Dark Knight Rises, Jonah Nolan has been privy to a specific visual process in a way that he’s carried forward in his own productions. For five seasons, he ran the CBS/Bad Robot show Person of Interest, a series with its own unique visual language. Now, he and his wife, Lisa Joy Nolan, have resurrected and adapted Michael Crichton’s 1973 sci-fi thriller, Westworld, as a new series for HBO. ICG writer Matt Hurwitz learned that, like the original, it was shot on film.

What was your shared visual approach to resurrecting Westworld? Jonathan Nolan: We wanted to do something that was not just challenging narratively, but also something that really tried to challenge cinematically. We wanted something with big scope, and we wanted something with a bold graphic look. We knew going in that juxtaposition and montage were a big part of the language of the show – cutting back and forth and trying to find a visual connection between the two distinct universes, a full-bore western and the science-fiction film.

Your previous series, Person of Interest, was shot digitally. Why did you decide to shoot Westworld on film? I grew up in a household where we were shooting Super 8 films. Some of my earliest memories are of Chris using the Super 8 camera to do stop-motion effects. My brother has always been a very vocal proponent of films. I shot Person of Interest entirely on the Arri Alexa. There’s great flexibility shooting digital – though Chris would tell you that there’s nothing you can do with an Alexa that you can’t do with a film camera. But I like to think I have a somewhat balanced view about it. For Westworld, Lisa and I felt very strongly, very passionately, from the beginning, that if we wanted the full scope of a Western, the only way to capture that was to shoot on film.

What was it like for you to make that shift? I’ve watched 800 days of three camera bodies shooting Arri Alexa. And for the period in which we were shooting the [Westworld] pilot, we were still shooting Person of Interest. So for two years, I literally had an edit suite on Floor 3 of our building where I was looking at 35-millimeter film from Westworld, and one on Floor 2 looking at Arri Alexa footage. The Alexa’s a fine camera, but when I was walking back and forth between the edit suites, it was shocking to me [how pronounced was] the difference. A lot of people will say about film, in a slightly sneering way, that it’s just about softness. Softness is part of it. But it’s also color depth. There is a luminance and a beauty in film. There’s a luminance and a beauty to film that is just incomparable.

How does the experience for cast and crew differ on set? When you’re on set and you start a film camera, and the actors hear it, it’s almost Pavlovian – people bring their best work. They focus. The set gets quiet. People concentrate. It reminds everyone that what you’re doing is important and meaningful (and expensive), and compels them to bring their A-Games with every take. The limitations of film force you to do your very best work.

Growing up on set with my brother, it was always the actors, an operator, a DP, an AD, a script supervisor, and a director – and that’s it. Part of my problem with digital is that I’d show up on set, and I’d watch the actors and see the script supervisor, and I’d see the AD – and then I’d say, “Well, where’s the director? Where’s the DP?” And I’d be directed to a little pup tent nearby with a couple of butts hanging out! (Laughs.)

On Westworld, you did something that’s almost archaic these days, certainly for television: watching dailies on a big screen in a trailer at lunchtime with your production team. How was that important to the process? That was something, again, that I learned from my brother. It was lovely to see how responsive the crew was to that, and how happy they were to spend their lunch sitting with us in the trailer. It’s a collaborative process, watching dailies, and the best way for everybody to see if things are working. Not just for the camera department and director, but also for the makeup team, the wardrobe team – to see, how does that fabric photograph?

What were the main benefits for the camera team? There are subtleties in the camera movement that you can only see that way. For example, we had the advantage of working with a great operator – Chris Haarhoff – and we wanted his camera to echo how the Hosts [the robotic characters in Westworld] moved and to even create sympathy for them. The camera needed a slightly inhuman feeling, which was something very subtle that Chris was able to introduce. You have no way of knowing if that’s working if you’re just looking at it on your laptop at night before you fall asleep.

Why was shooting on practical locations – including in John Ford country in Utah – so important? I came to this country when I was 11, and I’ve never turned down a road trip since. [Laughs.] I’ve driven across the country a half dozen times. But my heart always used to skip a beat when we hit Utah. That state, north to south, is so distinct, and so distinctly American. There’s only one place in the world that looks like southern Utah. The production designer for our pilot, Nathan Crowley, knew every square inch of Utah, from his work on John Carter From Mars, and was very focused on Moab, where we were based when filming there. Our look was a synthetic western, so we needed a landscape that evoked almost a hyper-real experience of the American West.

You actually brought set pieces out from Los Angeles to Utah – including one of your railroad cars from your home studio at Melody Ranch. Why go to all that trouble? I’m not a big believer in green screen. Our visual effects supervisor, Jay Worth, with whom I’ve been working for years, is the first to tell you that it’s a tool you want to use as a garnish, not as a main dish. And Nathan, as well as our pilot DP, Paul Cameron, ASC, is an advocate of practical versus virtual. But it was challenging for the DP, as we wanted to shoot practically on both sides of every frame that we could.

Do you have an example? We had what we call our “Solarium scene” in the pilot, with two actors, Sidse Babett Knudsen and Simon Quarterman, whom we shot one side of at the Skirball Center [in Los Angeles] for the architecture. And then we took a piece of that balcony out to Dead Horse Point in Utah – we built the balcony, the handrail and a little portion of one of the pillars. So we have a moment which starts as overs, as they walk, shooting them against the Skirball Center, then they walk forward. Then we take them to the handrail, and they’re really at Dead Horse Point, looking out at that view. We felt strongly that because we’re building these two distinct worlds, the tech world/science-fiction component of the show, and then the western – any point at which we were stitching those two worlds together, we wanted to do it practically. There had to be a real connection or the audience would feel the cheat.

You used a projection system to throw imagery of Westworld onto a 3D sculpted map and capture in camera, instead of CGI. Why? Before making Interstellar, Chris had watched The Right Stuff, and he’d been struck by the use of projection effects in that film. They look great, and you can’t quite tell how they did it. He ended up using something similar that he developed with Nathan and [cinematographer] Hoyte van Hoytema [ASC, FSF, NSC]. You can digitally keystone from multiple angles. For the Control Room set you noted, we knew we wanted a technology that looked and felt unlike anything seen before. And we felt like projection was a way to create a luminous technology whose workings you didn’t quite understand. It also had a huge advantage, in shooting terms, because the reflections and interactive light are all real. We do not have to build it after the fact in a computer. The actors can interact, so it becomes more real for them as well.

The visual imagery in Westworld is subtle, but it has an emotional connection to the story. How do you achieve that? I think my tastes tend to emphasize story over style. We wanted to imbue this show with visual power, but we also didn’t want to overpower the performance or the feeling from it. The real emphasis I’ve learned from watching Chris [make films] is to create transparency, where technique disappears. If the audience is aware of the camera equipment and thinking about the shot, you’re off track. To me, good filmmaking is transparent. The technique simply disappears.