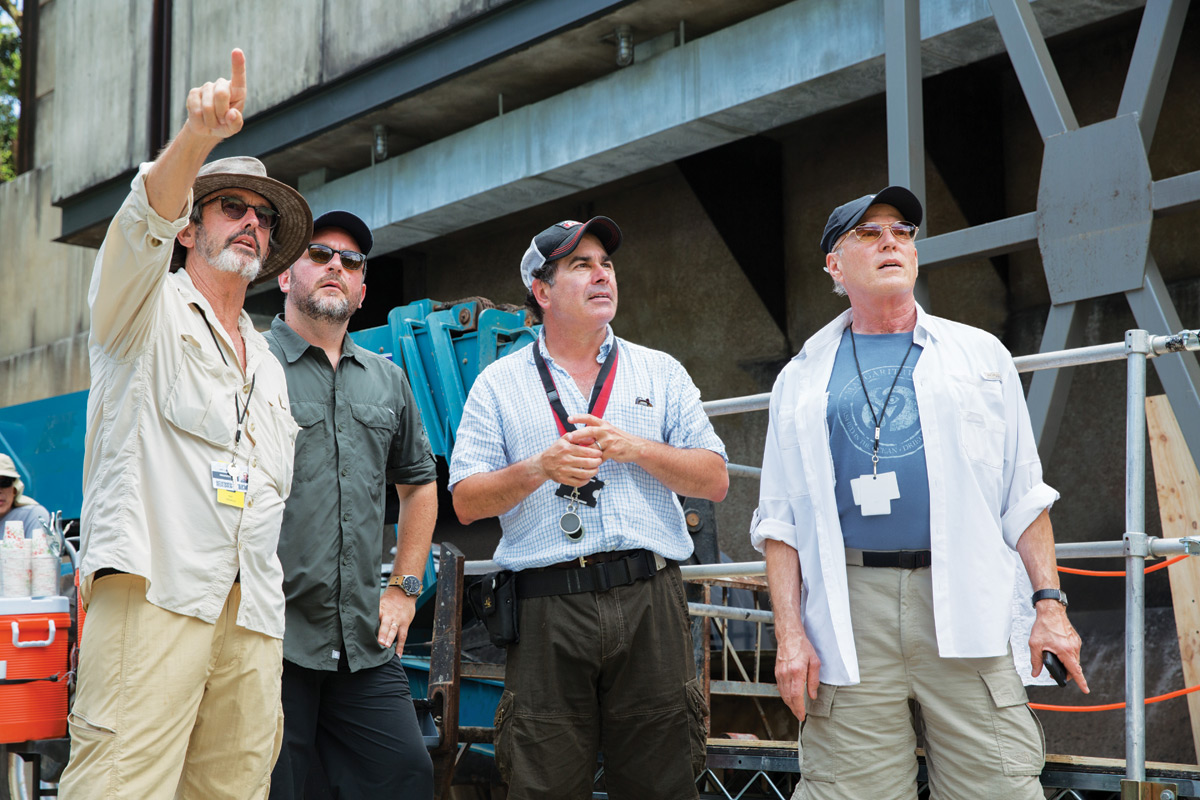 Jurassic World producer Patrick Crowley comes from a heritage of moving camera – his grandfather, Walter Rubner, worked both as Alfred Hitchcock’s dolly grip and Orson Welles’ crane grip. Through the 1980s, Crowley worked as 1st Assistant Director on such films as The Natural and The Believers, moving into the UPM and producer roles in the 1990s and 2000s, on the latter Robocop films. His work as a producer on the hugely successful Bourne films puts him in a unique position to talk about changes in action cinema over the last few decades, and what is required of the camera team. Matt Hurwitz talked with Crowley, who illuminated some of the key skills he feels cinematographers need to ride the action-movie train.

ICG: How have on-set tools changed the filmmaker’s ability to move the camera in the last few years? Patrick Crowley: Well, on a television show, for example, you very seldom today come into a shot that isn’t moving. There’ll be some sort of slider, in which the camera may only move 18 inches to the left. But it used to be, say, in 1980, moving the camera was a momentous deal, as you didn’t have a Steadicam. And cranes were something only very special projects got to use. I remember when a Titan crane would show up, people would just gather around as if the circus had come to town. It was such a purpose-built, massive piece of equipment, and to have the privilege to have it on a given day – whatever the shot was – it was going to take longer than any other shot that you were going to get.

Jurassic World’s DP John Schwartzman is a big fan of the Technocrane. How has that device changed image capture on set? The thing I learned the most from John on this project was the value of the 30- and 50-foot Technocranes. I had never worked with the Techno as a primary camera platform. In fact, I kept giving John grief – we would take pictures of the two dollies that we had rented, and I’d say, “John, we’re paying for this? When are you gonna use it?” And he’d say, “Well. . . I might never.” [Laughs.]

Had [director] Colin Trevorrow used the Techno much? I’m not sure Colin had ever used one, and for him then to be able to learn to use it as a tool, especially from John, was special. It allows you to get those extra shots quickly – “Okay, we want to get a close-up” is followed by, “We’re ready for it now.” The lighting is already set, and you’re already on the same axis as the master, so you know it’s going to cut well. And when you want to get coverage, it’s very easy to move. Particularly in a movie that is a thriller, being able to march into people, to get in closer and closer, as they realize that there’s something out there, is fantastic.

Was John able to offer any guidance regarding its use? He would sometimes remind Colin, “The Technocrane gives you the ability to make these wonderful moves, but you’re going to want to be able to cut into the sequence sooner. Don’t put yourself where you have seven seconds of beauty, and you don’t have a good place to cut into it, because you need to increase the pace of the movie at that point.” So we always covered ourselves, so that we weren’t trapped in a shot. And I have to say, John is such a comforting presence on a set, you never really feel intimidated [by his input]. He approaches his work like a really smart industrial designer would. There’s never a lesson that he’s learned on a set that he hasn’t remembered.

The Spydercam plays a key role in several scenes. How has that evolved? I was the First AD on The Natural in 1984, and I remember Garrett Brown [inventor of the Steadicam] came in with the Cablecam, which had only been used on the Olympics. Robert Redford would hit the ball and then go to first base, and right alongside his head would be this camera going along with him. Everybody was astounded, seeing the computers operating the winches and pulling the camera.

How has that evolved to what you did on Jurassic World? Today it’s also programmable, but to a much more precise degree. If we wanted to make a change, the guy would tell us, “I need maybe two or three minutes to reprogram it,” and that used to be a really big deal.

Any examples from Jurassic World? We have a scene that we shot on green screen on stage in New Orleans, where the boys are being attacked in their GyroSphere. We used the Spydercam to do some tracking shots, and those needed to match the movement in our plate shots. ILM had spent a lot of time figuring out exactly where the camera needed to be, and we were able to match those moves on stage perfectly with the background plate moves. Ten or 15 years ago, that whole thing would have probably required a motion-control camera, but here we had preprogrammed moves we could repeat seamlessly, and faster than it would have been with a motion-control system.

What about changes in visual effects over the years? When they did the first Jurassic Park, Phil Tippett was going to do the dinosaurs. I remember there was a point at which they told him they were going to be creating the dinosaurs digitally. Phil called me up and said, “I’m throwing all of my optical prints in San Francisco Bay. It’s the end of an era.” [Laughs.] Of course now you have the ability to take people and put them in motion-capture suits with sensors, and you have Raptors that live and breathe. The MoCap allows you to give them more lifelike performance qualities, and the animation can bring a level of detail that wasn’t there in 1993. I was actually a bit naïve at the beginning of this film – I called up ILM and said, “Well, you’ve already got all these dinosaurs. We can use that stuff that you already did from 1993, right?” And they said, “No, no, no…you don’t understand.” I thought I was going to be able to use all these assets and not have to build them again! But it’s a different world.

What do you look for in a DP shooting an action movie? Probably one of the key things is flexibility. On the Bourne films, we were working with Doug Liman as the director, and Doug was very open-ended as to how things should be shot. We were shooting in Paris on one film, looking down the street for a big night exterior with seven-story buildings around us. We had planned to shoot a scene in one direction, and Doug said, “Ah, I think I’d like to shoot in the other direction.” Our DP, Oliver Wood, turned to me and said, “You know, I’m going to need at least 10 or 15 minutes to make that happen.” I had been used to, “I don’t think we can do that tonight. We’re gonna have to change everything.” Oliver turned a few practical lights on and re-aimed a couple of other lights, and we were ready to go.

Does John [Schwartzman] have those same qualities? Oh, definitely. John is so production-aware and willing to shape things so that you’re always ready to get the shot. He will do an amazing job rigging the set, so that any direction you want to go, or any light level that you need to have, he can make adjustments very quickly. We never waited for John. He always thinks way ahead of everybody. It may cost a little bit more money to rig those sets, but you don’t wait, you get your day’s work, plus a lot more.

What other qualities do you look for? For an action film, you don’t have to worry if the DP knows how to make the lead actors look incredibly handsome or beautiful, because you’re not likely to be having long sequences. They need to be able to move the camera, because that’s inherent in what it is that you’re doing. They also need to be able to work in low-light situations; because in a lot of action-based films, you’re supposed to feel that it’s real, and that you’re there. That requires less lighting than you would normally use.

What are the key skills for a Second Unit DP? Obviously, a Second Unit DP [Patrick Loungway on Jurassic World] has got to be somebody who’s done a lot of action, because it’s usually less about lighting, unless they’re doing a lot of night work. They need to be somebody who feels at ease with following the lead of the First Unit DP, because that’s their job. The Second Unit DP does not really define the visual style, as much as they have to be able to make [their footage] work with first unit. Sometimes, they have to be placing five cameras, and all day long, so knowing what the camera is likely to see is important.

And a close relationship with the Second Unit director? Well, the Second Unit director [David Leitch on Jurassic World] has a lot of responsibility, in terms of camera placement and orchestrating the stunts so they will photograph well. And they have to be really good at orchestrating operators. Second Unit operators are typically different than First Unit operators. A lot of them come out of sports, where there’s just that one chance to be able to get that 40-yard pass. They had to get that, ’cause that’s what their livelihood depended on. So you need to have operators who have that same sort of split-second responsiveness, when dealing with a car or a motorcycle or something blowing through the frame.

What memories do you have of your father’s work? I remember, growing up in Laguna Beach [California], my grandmother would say, “Well, where’s Walter? It’s time for dinner. Oh, he’s on ‘golden time.’” And he would be making overtime or something. He was certainly one of those guys for whom it was all about moving the camera. He did a crane move for Orson Welles that had 26 compound moves in it! That was the kind of stuff he got off on – taking the camera into places to which you never thought you could get. Or bringing it close to actors, and then coming back and seeing the set, all in one shot. That filled him with a lot of pride.