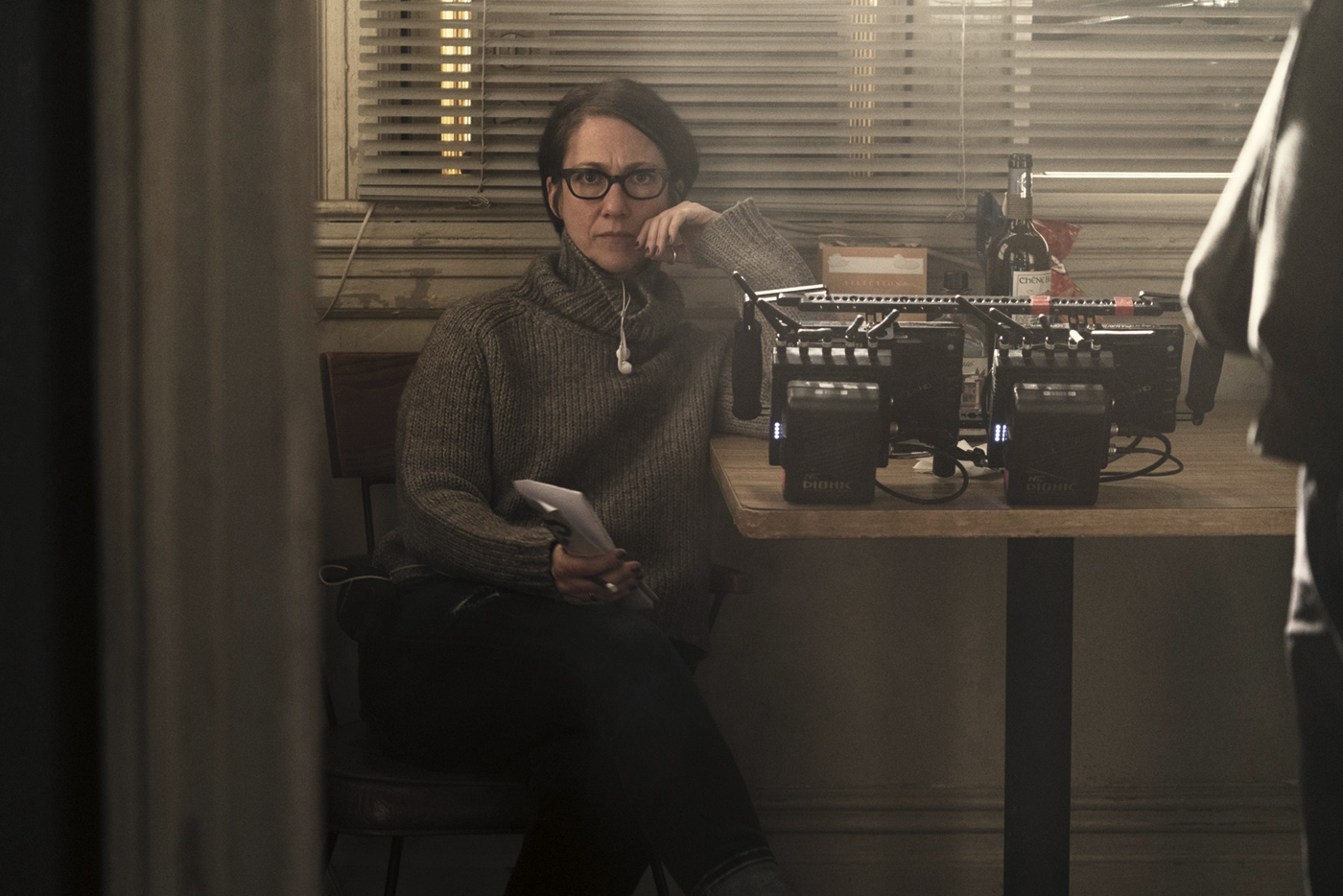 S.J. Clarkson has been a very busy director in the last decade, tackling assignments that have had her crossing back and forth across the Atlantic.

Having started her career in England [where at the time of the interview she was shooting Collateral, a political thriller miniseries] her work crosses genres as well, ranging from the initial episodes of Dig and the contemporary cop procedural Whitechapel to Heroes, Orange is the New Black, and Ugly Betty, (as well as a pair of) rough-and-tumble hours in Banshee. One of Clarkson’s best-remembered episodics was the penultimate installment of Dexter, Season Four, in which John Lithgow’s serial killer discovers the lead’s identity, confronting him with a smile accompanying the chilling words, “Hello, Dexter Morgan” (the episode’s title.)

Local 600 Camera Operator Stephen Consentino has worked with Clarkson on Vinyl and The Defenders and offers the following assessment of her approach. “S.J.’s a good motivator, always challenging you to come up with a fresh camera angle. She wants atypical coverage rather than just over-the-shoulders, but it’s never just cool-for-cool’s-sake.”

Clarkson’s initial love was theater, where she worked a variety of behind-the-scenes jobs that helped develop her talent for storytelling. She segued into filmmaking, first in animation before moving over to live action. After delivering big with the first two episodes of Jessica Jones [ICG January 2016], Clarkson is back in the Netflix/Marvel universe, helming the superhero team-up that is The Defenders, which reunites Jones and Luke Cage, and adds Iron Fist and Daredevil to the team.

What triggered your return to the Marvel universe? Clarkson: As it happened, everybody was very pleased with how Jessica turned out, me included. I had no idea just how many people would end up watching the series. I figured there would be the Marvel fans, of course, but it turned into something much larger. When I was asked about doing The Defenders, I did hesitate at first. I didn’t want it to be an amalgamation of what had gone before. Jessica was a great platform to set up for me, but I had to make sure this new show would be bold enough and have its own dynamics.

Your idea for fusing the established color palettes for each principal Defenders character when they are onscreen together sounds like a strong visual hook. With nearly all of my projects, I put together a visual mood board, just to line up my thought processes. My combining of colors sounds like a comic book thing, but that wasn’t really the inspiration. I’ve tried to avoid making the Marvel shows look too much like a comic. The graphic novels have great imagery – I wound up reading all of the Jessica Jones books and found many quite inspiring – but [graphic novels] are a very two-dimensional medium. I wanted to give each character a distinct voice visually, and also respect who is leading each scene. It might be Luke, but is it Luke in Jessica’s world? Jessica had all these blues and steely grays, and Daredevil was all about the reds, while Luke is in brown hues and Iron Fist’s costume had some green. I thought the colors and the camera movement could be combined to help reveal their worlds and how they all interact. The palette is also a way to celebrate these characters coming together at last, which should be one of the elements that the fans will find most exciting.

And then there’s a lack of color with the villain’s lair, which is a changeup from tradition. Everybody always goes dark with the baddies, but when we got Sigourney [Weaver], that immediately suggested a different route to me, especially with what her character is and does – which I still can’t talk about yet, sorry! [Laughs.] At any rate, Signourney’s character really lent itself to this overexposed look that contributed to her otherworldliness. It also served as something of a palette cleanser

Some directors starting off in the digital era seem to rely on post for creating a good deal of their imagery, but your inclination is toward in-camera. My years in theater taught me a bit about every aspect of stage production. On stage, it’s all smoke and mirrors – literally – with misdirection and very specific physical lighting cues to get the audience looking where they need to when you need them to. It requires you to be using the stage tools in an editorial way, for dramatic effect and proper timings as events play out. In terms of filmmaking, I like to do as much in-camera as possible. What we’re shooting now throughout London [for Collateral] shows me that there’s no amount of trickery that would ever make up for us not actually being here.

So how do VFX, which is always key to the Marvel universe, fit into the equation? It makes sense to get as much of the mood and the story points addressed during shooting, then let VFX supervisor John Kilshaw and his wonderful team refine and improve things that already work. But if you rely on it every time you cut to a wide shot, that can hurt you. If you are very specific in terms of the times you choose to use the artistry, it can enhance and support the director immensely with achieving the storytelling to full effect. When Jessica jumps off the fire escape, we did that in-camera, two shots, one of her jumping out of frame, and another with her on a wire for landing. That practical approach worked for her character as well as the story, since she is rather scrappy and hands-on in her approach. I’d rather go that way than have VFX do the bulk of it, except in those certain circumstances when there is something extraordinary and it becomes their ball to carry.

When coming into an existing series, how do you interface with the performers and crew who have already established character and show style? I always do my homework. On series like Dexter and House, you watch episodes to understand the characters and pick up on what the audiences know and expect. And each script takes them someplace different; in The Defenders, the main Daredevil character is in a much different place than he was at the end of season two on his show. It’s all about understanding what the character is while bringing something of your own understanding to the actor that will hopefully benefit the performance. It was an important key for me to get inside Marco Ramirez’ head, and that of [co-executive producer] Lauren Schmidt, since he wrote the pilot and has been the showrunner.

Stephen Consentino, who also worked with you on Vinyl, said you like to challenge your camera operators to come up something different and better. I’m always asking myself how to make the shot better. How can I get the performance better, how can I best validate this material? These questions go on right up to the moment of the shoot, and when you’ve got collaborators like [Director of Photography] Matt [Lloyd] and Stephen and [Operator] Jon Beattie, who aren’t just terrific at what they do, but also share this passion to make it better, it is just terribly exciting.

Speaking of your DP, Matthew Lloyd, he mentioned your strong preference for working single-camera, which is kind of against the grain given schedules these days. For big stunt moments, I’m fine with three cameras or however many you can afford. But sometimes on a TV schedule with multiple cameras, there’s a tendency toward what I call ‘hosing it down.’ You just stick B-camera in for the sake of having the extra angle. To me, that works against the process of trying to figure out the best way to frame the shot and tell the story. It dilutes your approach for the sake of coverage. I prefer being more specific, and I think that helps focus editorial. Also, you can spend quite a bit of time on set just making sure the two cameras don’t see each other, and I find that counterproductive. When there are two cameras, I like to leapfrog with my DP. We’re on A-camera working out an eyeline, while B-camera is working on an overhead view that brings some characters across the room. That overhead might take 20 or 30 minutes to rig, so having that setup happen while I’m shooting the A-cam makes the most of my day.

What are your specific future goals or projects? I’m been very fortunate with the material being offered me with TV, but of course I’d like to be able to switch between that and features when the material is good. I’m at my happiest when working, so the delays inherent with features might interfere with that a bit, so TV keeps me busy and engaged.

Is there any particular type of script that attracts you? It’s about how I respond to the material when I first read it. I don’t really think specifically about how I’d be using 50-foot Technocranes, but what does drive my thinking is considering the visuals that might enhance the drama, both from a character point of view and for the visual spectacle inherent in the drama. Twenty pages into a script, I have to be connecting to something, either a character or the conflict coming out of the situation they’re in, or the world and atmosphere. Jessica Jones spoke to me immediately as being a blend of film noir and The Third Man, so tackling that in a modern way with an antihero seemed like a combination that might work. When I read a sequence and immediately know how to commit that to film, then read it again and find something deeper to consider, then I realize, “Well that’s it then – now I just have to make this!”