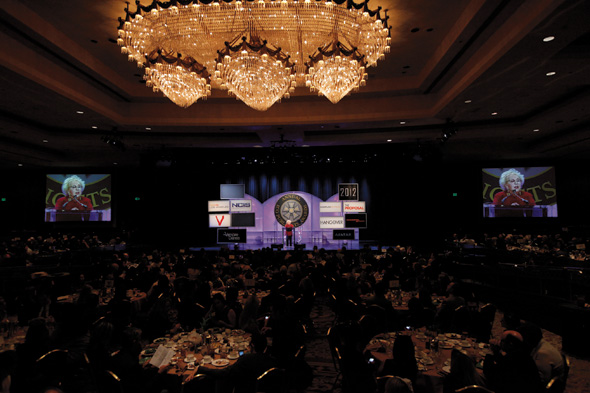 “The classic image of a Hollywood publicist came from the movies of the 1930s and 1940s. Fast-talking white guys in double-breasted suits who chain-smoked and hung out with reporters, shouting, ‘Boys, have I got a story for you!’ They served a comedic purpose, but did not reflect reality. In reality, a good publicist is much more,” stated President of Local 600 Steven Poster, ASC, in his opening remarks at the recent Publicists Guild Awards. The star-studded event, attended by nearly 1,000 people and honoring the often-unsung heroes of the entertainment industry, was presided over by Extra host Mario Lopez and held at The Hyatt Regency Century Plaza.  Celebrity presenters included Joel David Moore (Avatar), Eric Braeden (The Young and the Restless), Heather Tom (The Bold and the Beautiful), Dean Morris (Breaking Bad) and Merle Ginsberg (Bravo’s Launch My Line and Rupaul’s Drag Race).

“These awards were created 47 years ago when the publication in a newspaper or magazine of a photo showing a publicist alongside a celebrity on a movie set or at an event was cause for termination or, at least, severe reprimand,” explained Awards Committee Chairman Henri Bollinger. “We’ve come a long way since then. Today we openly celebrate the work of entertainment publicists, who are, after all, responsible in large measure for filling seats in movie house on opening weekends and delivering viewers’ eyes to TV sets during ratings periods.”

And, it wasn’t only the publicists themselves who were honored. Through a series of screenings and ballots the members of The Publicists Guild chose to recognize industry luminaries for their contributions with special honors that included a Lifetime Achievement Award, Showmanship Award, and Award of Merit. Those so honored quickly turned the tables on their audience and lauded the contribution of publicists to their own careers.

“I feel privileged to have been able to follow a boyhood dream and spend my life doing what I wanted to do – make movies,” director/writer/producer Robert Zemeckis said as he took the podium to receive this year’s Lifetime Achievement Award from Rich Ross, Chairman, Walt Disney Studios. And then Zemeckis quickly singled out his own personal publicists at Rogers & Cowan, Paul Block and Michelle Bega, insisting that, “publicists are vital for the sustainability and survival of this industry.”

Although he is one of Hollywood’s most prolific filmmakers, Zemeckis has never lost that youthful “wow factor.” He shared the first steps in his career, which began with watching Jerry Lewis’ visit to The Tonight Show. When the young Hollywood wannabe realized Lewis actually taught directing at a school called USC, his fate was sealed. He was going to be a filmmaker. It is that enthusiasm, still present today, that has made movies like the Back to the Future series, Forrest Gump, and others such iconic crowd-pleasers.

Zemeckis also focused on the movie goers around the world who are “the folks that keep me up at night wondering what to do next. Maybe some kid out there will wander into a theater or download a movie to his phone and become inspired to go out there and get some images and develop into making movies.”

Levity was a big part of the afternoon’s events, particularly when George Clooney made a surprise appearance (lugging green “swag” bags in honor of the ‘greening’ of Hollywood theme) onto the stage, as he came out to honor his long-time publicist Stan Rosenfeld with the Les Mason Award. “I’d like to thank those publicists who get their client’s jobs on telethon phone banks, get them quietly into rehab and back in when they sneak out,” Clooney smirked. Then turning serious, the popular star recognized what the award – and Rosenfeld – are all about – keeping high standards in a ruthlessly bottom-line industry.

“I think I’m going to have a Sally Field moment,” Rosenfeld said softly as he took the podium. “My career didn’t start well,” he admitted. “My first interview was with the legendary Henry Rogers and I really botched it. The only thing that we agreed on was that it wasn’t going well. In the middle of the interview Rogers took a call. I heard him say ‘do you have plans for lunch?’ and I quickly responded ‘No.’ Then I realized he wasn’t talking to me. So, obviously I never worked for Rogers & Cowan.” Thankfully, Rosenfeld persevered, going on to service a stable of loyal performers. “I thank those clients for sticking with me,” he smiled in perhaps the day’s most nakedly honest moment. “It’s because of them that my phone calls get returned!”

One of the delights of the afternoon was Doris Roberts’s introduction of the Special Award of Merit winner Ernest Borgnine and his acceptance speech, which included a revealing look at how “Old Hollywood” sold a picture. “Marty was never supposed to be made,” Borgnine said when speaking about his Academy Award winning role. “The idea was to shoot half the picture and take the tax loss. Then they found out they needed to complete the picture and show it in at least one theater.” That’s where the publicity arm came in. “I never went through so many butcher shops in my life,” the 93-year-old actor laughed. “Or manicurist shops, barbers, shoe shops. Finally, the great Toots Shor started ‘talking about it’ to his customers.” And the rest was movie history.

Marty may have been “sold” over 60 years ago – but the core process hasn’t changed – it’s just gone global, as James Cameron revealed when picking up his Motion Picture Showmanship Award, presented by actress Sigourney Weaver. “We did 27 countries in six hours,” he joked, referring to the blur that the Fox publicity arm set up to bring Avatar to a worldwide audience. Acknowledging the national and international teams behind the selling of the biggest moneymaker in film history, Cameron singled out Sean Dudas from Revolution Studios and Natalie Johnson and Tim Menke (co-chair of the event) from Fox.

Cameron acknowledged the uphill battle they fought – no branding, no sequel, no franchise. “It is remarkable how much work they [the publicity team] did to get the right exposure,” the filmmaker said. “And, how successful it is when a good publicity team does their thing.”

The introduction to Shane Brennan, executive producer for NCIS and NCIS: Los Angeles, Cameron’s counterpart in the Television Showmanship Award category, drew laughs when the many writers in the room heard the Australian-born Brennan growl – “there will be revisions, there will always be revisions.” When he accepted the award from NCIS stars Michael Weatherly and LL Cool J, Brennan immediately acknowledged publicists as “the people who actually know what goes on in this town.” And realized that “a lot is done behind closed doors, fixing problems, planning, doing things that don’t ever get seen. They make my life both easier and harder, but more often than not, they make the hard parts easier.” He then went on to thank the 13 publicists in the “NCIS family” that do that every day.

While much of this event is geared toward fun and good-natured roasting, it is always a more somber moment when The Bob Yeager Award is given out. Each year the publicists acknowledge one of their own for his/her unselfishness under fire. This year, Pam Golum, The Lippen Group Vice President, was honored for her commitment to giving back. In accepting her award for “improving the human condition” through her pro bono work for The Alliance for Children’s Rights as well as the Acoustic Neuroma Association, Golum voiced why we all must give back. “We are in a business with a lot of power and influence,” she said. “It’s important, no matter how little or how much you can do. You use that power and influence for those less fortunate.”

In addition to these special awards, The Publicists Guild singled out several other honorees. The International Media Award went to Chris Hewitt of the U.K., the Maxwell Weinberg Showmanship Award for television went to NCIS/NCIS Los Angeles and for features to the Warner Bros. publicity team for The Hangover, and the Excellence in Unit Still Photography went to Andrew Cooper. It was when this year’s Press Award winner Anthony Breznican of USA TODAY, took the podium that the publicist’s biggest contemporary challenge, instant dissemination of information, hit home. Breznican laughingly admitted he was scooped on his own victory when Variety broke their embargo and his wife texted him he had won moments before walking up to the podium.

“Modern audiences are overloaded with information and opportunities to be entertained and informed,” Poster had pointedly singled out in his keynote speech. “So, our challenge, as an industry, is to cut through the media clutter. That’s how we’ll sell our product, build our audience, and expand our industry. What’s the best way to do that? The people in this room are the people who are figuring it out, and that’s’ why [we are all] so pleased to honor our publicists, those who are challenged by today’s unlimited sources of instant informational gratification while finding the best ways to expose their message, protect their talents, and draw audiences into the theaters, the video stores or in front of their television (or iPhone) screens.”