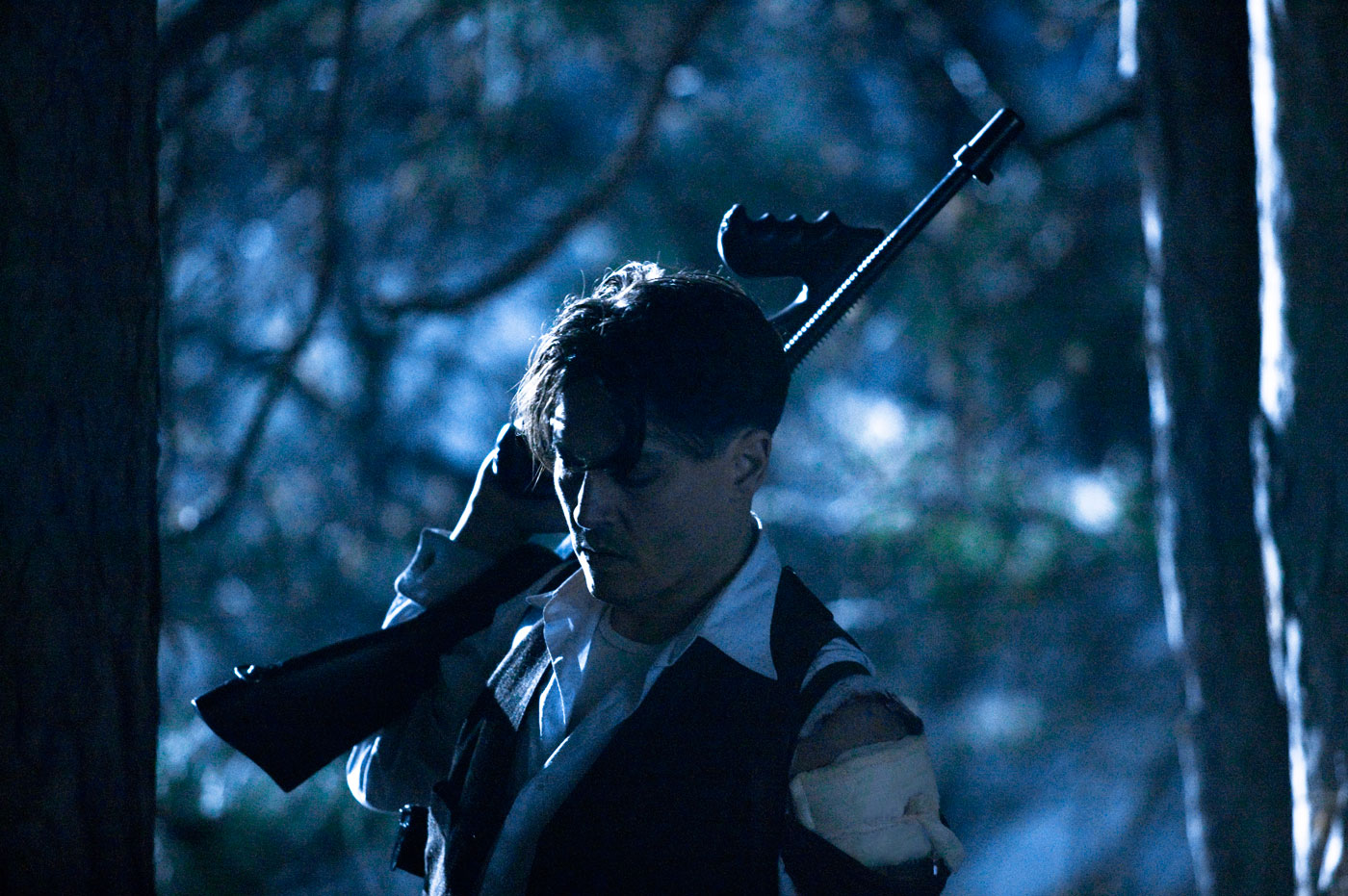 Starring Johnny Depp as Dillinger and Christian Bale as his dogged pursuer, Agent Melvin Purvis, Public Enemies reunites Mann with his long-time creative partner, cinematographer Dante Spinotti, ASC, AIC. In the past, the pair has collaborated on such critically acclaimed hits as Manhunter, The Last of the Mohicans, Heat and The Insider.

Spinotti says that Mann originally wanted to shoot Public Enemies in a “traditional manner,” that is on film, using dolly moves and “very correct” camera set-ups. But then the pair decided to compare film to digital to see which might better reflect the freshness of the Dillinger source material. Spinotti had used Sony’s F23 2/3-inch sensor camera (which captures in full 1920 x 1080 progressive in 4:4:4 RGB color space) on two commercials, but was uncertain how it would translate to the big screen. Side-by-side tests were performed in the parking lot of Mann’s production offices, pitting the F23 against a Panavision Super 35 loaded with the flexible Kodak Vision3 5219 stock. The tests replicated some of Public Enemies’ anticipated conditions – daylight, dusk, night shots – and employed 1930s cars, streetlights, costumed stand-ins and period posters plastered on a background wall.

Mann and Spinotti were impressed with the depth of field of the F23, which offers a robust B4 lens mount, particularly its ability to capture the background in sharp focus. Spinotti says the pair noticed that the F23 delivered a sharpness that was very acute.

“It was interesting to shoot a period piece in this hyper real, ultra detailed way,” the cinematographer reflects. “While at the same time, you have cameras that can also fly all over the place and be carried handheld with a zoom. The operators can come out of the bank robbery and jump in a car and follow our heroes down the road. The camera is very close to the story and the actors, and it also has the ability to register real locations with a different kind of reality than film. Michael was interested in having a movie that was not attached to convention, or a period look. He always uses a very strong establishment of the visual language in the film, making sure it’s a step forward.”

Video controller David Canning said that Mann works with HD cameras differently from most other filmmakers in that he wants the recorded picture to be as close to what the film will ultimately look like on the screen. “We did stuff in the camera,” Canning explains, “saw it right then, and recorded that. We went further in the DI suite, but the look is pretty much set right there in camera with Dante and Michael.”

“With the F23 you can do things to the color directly in the camera that will be what you have in dailies and in the film later, but from which you cannot really come back,” Spinotti recalls. “In other words, we were not recording in a safe or comfortable way. Dave Canning and (digital imaging technician) Ted Viola did a brilliant job. In fact as I was looking at the compositing Michael was carrying forward, I could tell that it would be a laborious process in postproduction, adding layers and layers of exact correction, but the starting point was always the original look that was recorded on the tape.”

In addition, Canning believes Enemies may be the first feature film employing Ethernet control of cameras; using an IP-based system, by plugging CAT5 cables into a router, the control system instantly showed which cameras were plugged in.

Supplementing the three F23s were Sony 950s and an EX1. The 950 was the body cabled down to a deck for shots inside cars. “We had the Zeiss zooms which were 2.8 and very, very sharp,” A camera 1st A.C. James Apted notes. “We had two sets of zooms, 6-27 and 17-112, that we rented and kept the whole time. Michael was very happy because he could change the frame quickly. With the F23 you can take the deck off the back and cable it, which we did often.” [Taking the deck off did however create weight distribution challenges for the operators in that the cameras became front heavy.]

Other lenses included the Fujinon 42-by-9.7, which C camera operator John Grillo and C camera 1st A.C. Chris Cuavas used quite often to grab tight shots. In addition, the company also used a Fujinon 10-1 whenever the 17-112 zooms were in use.

Much of Public Enemies was shot in actual Dillinger locations, such as the Crown Point Jail in Indiana from which he made his most famous escape. Was the gun “Gentleman John” used in his breakout whittled from a bar of soap, block of wood, or was it actually real, as many Dillinger buffs have speculated down through the years?

Other scenes were shot in period buildings and on streets throughout the Midwest requiring a “take it on the road” methodology. Since Mann had grown up in Chicago and went to college in Wisconsin, he was familiar with the territory and drew from that for location scouting with Spinotti.

But with 100 percent location work, “it was not a case of let’s pull that wall and put the camera there,” explains A camera operator Lucas Bielan. “It was, ‘Let’s get in that corner.’ So you had to make the camera and yourself quite compact.”

Steadicam operator Roberto De Angelis agrees. “The most important thing for Michael is to be ready for anything,” he remarks, “Michael was always going, ‘OK, let’s do more.’ It was amazing. Usually I push the director. This time it was him pushing me. It’s much more creative than somebody who says, ‘Yes, it’s OK, it’s fine.’”

“Roberto and I did a lot of action sequences with the 950,” Bielan adds. “It was hard work. But it was worth it. It’s very risky, but that’s Michael, to take a film that is completely period, a very iconic and familiar subject, and make it in a digital format.”

Spinotti said the digital format afforded them the opportunity to record in any kind of light through an exact use of period practicals. “Obviously, in 1933 there was a different kind of illumination than there is now,” the DP explains. “The shadow areas are much more extended. The lights were dimmer. It was interesting to collaborate with production designer Nathan Crowley and it was a very tight operation between myself, (gaffer) Bob Krattiger and (set decorator) Rosemary Brandenburg to make all the practicals work properly for the scene.”

“It was a challenge all the time trying to get fixtures that would actually put out some sort of light source but would not come out well overexposed; stuff that would light ambiently but also light subjects,” Krattiger says. Krattiger was particularly pleased with a sequence shot in a Chicago theater using old-fashioned, Edison-type bulbs. “They were very warm. You could see the filament,” he recounts. “We put in keylight and a couple of little things but it was these warm bare bulbs that were in groups of three that lit the set and they’re really very pretty. To do that set in film you’d have to really push it. With digital we could dig in there a bit deeper and, at least with the F23, we could go with a lot more natural lighting.”

One of Enemies’ key action sequences occurs when the FBI surprises the Dillinger gang, who are holed up at the Little Bohemia Lodge in Manitowish Waters, Wisconsin.

“There were lights inside the lodge and, of course, there were a big number of gunshots that would supply flashes of light to faces and eyes,” Spinotti explains. “The chase continues along the lake. It was a very steep hill, and tough logistically to light; a tiny little trail on which the actors would run. Bob Krattiger had this big 30,000 watt Bebee light set up across the lake plus some little Kino Flos or bounce lighting added, when necessary, on the faces of the actors that basically covered the whole scene.”

While the film benefitted from original architecture, certain modern elements had to be removed or masked. For instance, while the production found several suitable period banks, a quick solution was needed to disguise modern-day asphalt with period cobblestones. Crowley, who feels that working in IMAX for The Dark Knight prepared him for digital on Public Enemies, says Mann himself spurred an innovative solution.

“Michael said, ‘Can we make something like a carpet that rolls out?’” Crowley offers. “My concern was that the reason we don’t usually do that is because when the cars are speeding out, they pull it up. So we had to find the right mixture. We molded cobblestones, cast them in a thin rubber sheet, then glued them together and made a street that we rolled up and carried on a great big truck!

“We did plenty of tests in the workshop with cars and cobbles,” Crowley laughs. “It was super thin so it wouldn’t sink down when cars were sitting on it, but not so thin it would rip up and wrap around the wheels. We’d have street shutdowns on Saturdays and Sundays, so on Friday night we’d roll out cobblestones — your instant street.”

Another truck carried metal tram rails that could be set down onto the rubber cobblestone street. Occasionally, a nonmoving streetcar mock-up on the rails was added to the period look to help mask elements in the deep background.

Oscar-winning costume designer Colleen Atwood (Memoirs of a Geisha and Chicago), who had worked with Mann and Spinotti on Manhunter, jumped at the chance to work on a 1930s era crime drama, expressing a fondness for the materials and fabrics of that era, and adding that from a costuming standpoint, the road nature of the film was challenging.

“We pre-fit the crowd, which required this mobile gypsy unit of clothes that moved from town to town ahead of the company,” Atwood recounts. “While they’re shooting, we were actively fitting the next scene in the next town!”

This was the designer’s first digital project, but because many films are now projected digitally, Atwood understands the demands of audiences becoming accustomed to seeing ultra-high detail. If she had concerns about whether certain materials worked, she conferred with Spinotti. For Enemies, she was able to mix in period clothing with manufactured clothing with fabrics she had pre-aged before construction. In addition, Atwood and her team had Dillinger’s actual clothes to use as reference. “We had a couple of really beautiful shirts, ties and hats, from a place that had archived his clothes, but they were quite fragile for us to use in the film,” she says.

And while the costumers replicated his clothes, the filmmakers attached an HD Scope, so De Angelis could shoot over Depp’s shoulder and through a pair of glasses the bank robber is wearing to best replicate what Dillinger actually saw as he exited Chicago’s Biograph Theater, with the infamous “Woman in Red.” Laying in wait, of course, was Purvis and his pack of G-Men, bent on taking out the nation’s first-ever “Public Enemy Number One.”