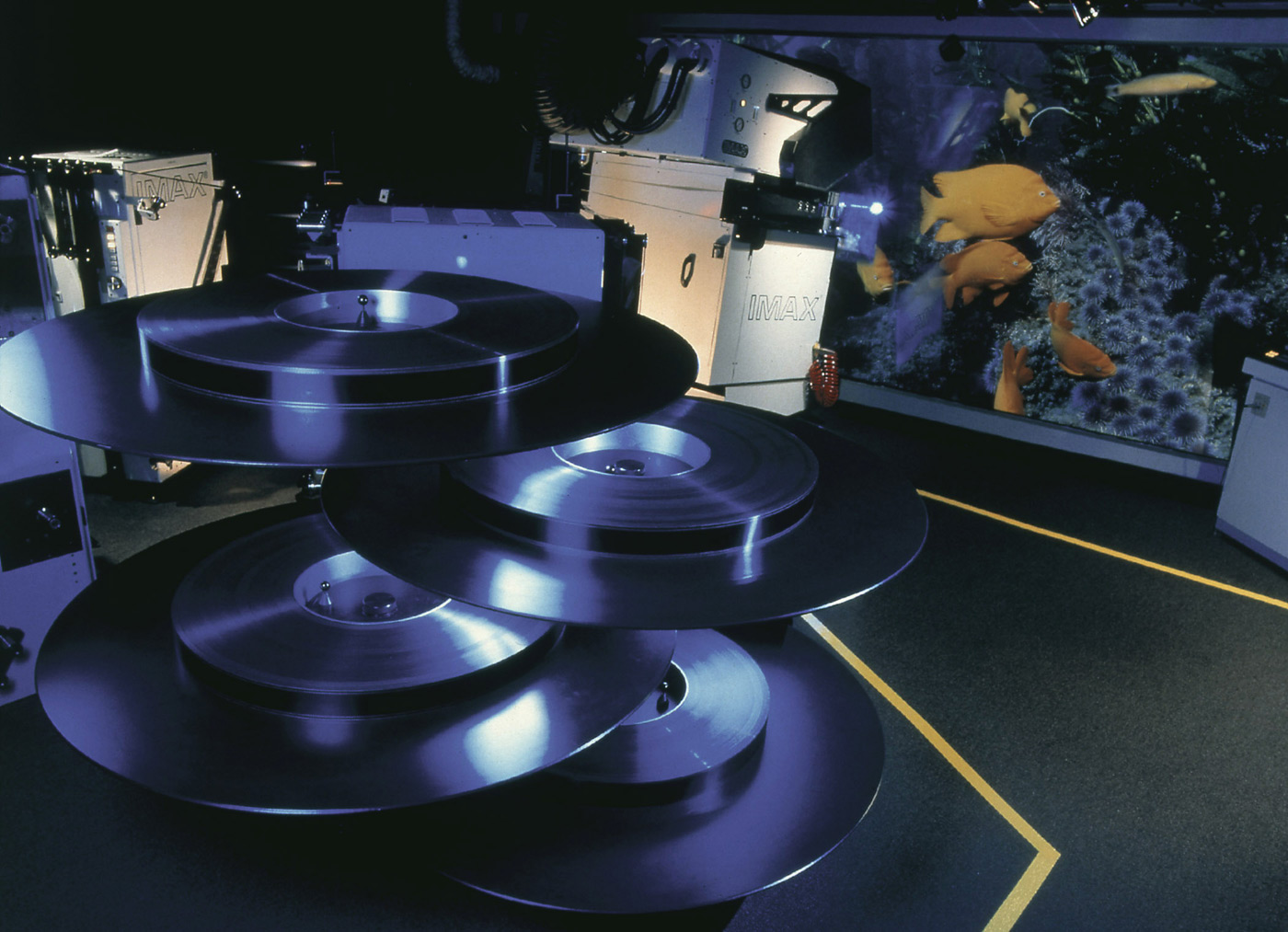 IMAX filmmakers take large screen format (and celluloid) to infinity and beyond.

If Aristotle was right that nature abhors a vacuum, then the debut of large-format venue IMAX in 1970 seems, in retrospect, inevitable. Three-panel Cinerama had gone the way of the dodo, and that same year, David Lean’s Ryan’s Daughter (Oscar-winning cinematography courtesy of Freddie Young, BSC) became the last major studio feature to shoot in Super Panavision 70 (save for Far and Away, shot by Mikael Salomon, ASC, 22 years later). The 1970s also saw the end of the “event” film released on a limited number of screens, and the beginning of the multiplex era, which further helped to “shrink” the cinematic experience.

Filmed shorts made using the IMAX process combined large-format shooting (15-perf 65-mm film) with extremely tall or domed screens. While the venue of choice was niche – museums and amusement parks – the huge-screen stories made an impact on audiences hungry for a high-resolution spectacle. By the dawn of the new millennium, IMAX was also reaping dividends up-converting conventional features via a Digital Media Remastering (DMR) process. Then, a few years ago, IMAX cameras began to show up on narrative epics like The Dark Knight (shot by Wally Pfister ASC, BSC), kicking off a large-format trend that has enjoyed pre-release debuts at IMAX cinemas – a kind of return to the “event” films that existed in the 50s and 60s.

Imax Entertainment chairman and president Greg Foster says the company has defined parameters for what constitutes an IMAX movie. “One part involves a filmmaker with a genuine IMAX vision, who is able to design their film with our process in mind,” Foster explains. “While we have many incredible partners, ranging from James Cameron to Zack Snyder and Michael Bay, Christopher Nolan is the best example. After seeing what our DMR did for the conversion of Batman Begins, Chris was eager to shoot parts of his next two films in the trilogy with our cameras.” In fact, over 70 minutes of The Dark Knight Rises were captured in IMAX, while Mission: Impossible – Ghost Protocol and Star Trek Into Darkness [see cover story] have each featured about 30 minutes of native IMAX footage.

Two other key aspects inform IMAX involvement. “The studio needs to be excited about making IMAX a part of their campaign,” Foster elaborates, “so marketing the IMAX release as a premium way to see the film supports our role. And we need to answer the question, Does the movie take the viewer somewhere you may have dreamt of but will probably never get to see? Everybody wants to go into space or deep beneath the sea, or else to the Tolkien universe of The Hobbit, or to be James Bond. Implicit in each of these worlds is a sense of scope. Even though Silver Linings Playbook is one of my favorites, that isn’t an IMAX movie.”

Entering the narrative space is new for IMAX, whose bread and butter has been non-fiction spectacles that take audiences to real places – Everest, the International Space Station – that Hollywood dared not go. Foster says documentaries have always been an IMAX priority, hence the long partnership with MacGillivray-Freeman Films, whose co-founder Greg MacGillivray has directed and produced more than 30 IMAX films.

Managing director and producer Shaun MacGillivray (Greg’s son) says the logistics of their operation can often be daunting. “Because we shoot in the most remote locations, we can’t use commercial travel routes,” he explains. “So we charter cargo planes or a helicopter, and, as was the case on Into the Arctic, a good-sized ship to get around.”

The large-format systems MacGillivray-Freeman employs are extremely heavy, with the native 3D Solido unit weighing in at 250 pounds. While regular IMAX cameras weigh about half that, the 2D underwater rig is 350 pounds. “For our current project in the South Pacific,” MacGillivray smiles, “we wound up taking 16,000 pounds of film and equipment. That includes two topside IMAX cameras plus the Red EPIC 3D system.”

Cinematographer Brad Ohlund’s IMAX experience ranges from To the Arctic 3D to The Alps, and dates back to MacGillivray-Freeman’s To Fly!, made for the Smithsonian’s Air and Space Museum. “A huge part of what we do involves delivering Hollywood-level production value on a documentary budget,” Ohlund explains. “IMAX film stock is the largest single line-item [$3,500 per processed roll], so if the scene isn’t working you may have to decide to stop rolling in mid-shot to avoid burning film indiscriminately.” While traditional documentary shooting ratios have ranged as high as 100:1, IMAX shows are usually closer to 20:1 or 30:1. “If we went to 100:1 on a consistent basis,” Ohlund adds, “all you’d see is footage of slates, because we couldn’t afford to go anywhere!”

The company partnered with IMAX to develop a camera capable of 110 FPS. But the unit is so cumbersome that it sees use only in special-case scenarios. Other IMAX cameras top out between 32 and 60 FPS. “Slow motion on that big screen registers more strongly than with conventional cameras,” Ohlund reveals, “so shooting 36 frames per second seems to give you a pretty good look for creatures in motion.” Aerial shoots are handled via Ron Goodman’s SpaceCam, a system Ohlund characterizes as “what suits us best.”

Before going on location, MacGillivray-Freeman filmmakers develop a shooting script to support the general concept, “but with the realization that on location something unanticipated can turn up and be just too good to ignore,” Ohlund outlines. “That can change your whole storyline, which is what took place on the island of Svalbard in To the Arctic.” Happening upon a mother polar bear and her two cubs, Ohlund spent five days documenting their perilous journey, which formed a new core for the film. “To coin an overused phrase, you have to become one with the animal you’re shooting, so anticipation is a pretty huge part of capturing the shot,” he adds.

Stephen Judson has worn many hats during his tenure with MacGillivray-Freeman, including writing, directing and editing. “Sometimes I don’t go out on location,” Judson notes, “because that lets me look at the footage fresh and remain unprejudiced by the knowledge of how hard it was to get any particular shot. With this format, being more image-driven than character-driven helps establish a magical sense of presence within these extraordinary environments. When the medium is working and fully immersive, the audiences are drawn in, as opposed to proscenium arch experiences where you’re on the outside looking in. A big part of our job is to design the films to work on 2D and 3D screens as well as digital and domed theaters.”

Moving the massive 3D IMAX camera was too problematic for the challenging locations of To the Arctic, which was largely post-converted. “We don’t convert all the aerials,” Judson observes. “If we’re flying along and a cliff swoops through frame, that would merit conversion, but for wider landscapes, it would be more distracting.”

Editing takes place at the company’s Laguna Beach office, while Sassoon Design often handles conversions. “They handled 2D-to-3D for us on Grand Canyon Adventure and Arabia,” Shaun MacGillivray states. “Since we scan at 8K and output at 4K or 5.6K, our partners have to be comfortable working with big files instead of 2K.”

IMAX’s conversion effort is driven by DMR, which undergoes periodic updating to maximize effectiveness. “Earlier versions of DMR focused on film-sourced content relating to grain and film-based artifacts,” says IMAX chief technical officer Brian Bonnick. “In the last four years we’ve addressed digital artifacts like noise, and now we employ a series of agnostic tools that work on all captures. Unlike other systems, DMR works in temporal mode, sampling multiple frames, which draws a higher level of fidelity as measured by MTF [Modulation Transfer Function.] Since we scan at the highest resolution level, we always have more information for input than needed for output. When your input is 4K or 8K, that kind of oversampling really helps make your 2K output look better than it otherwise would.”

Laser projection is poised to be the next big advance in theatrical venues. But rather than simply replacing the xenon projector lamp with a laser to get more light on screen, IMAX has bigger ambitions. In 2011 the firm bought 119 Kodak patents pertaining to laser projection, and is collaborating with Barco to develop a radically new system.

“For the last 20 years, the optical train has been roughly the same ride, which is, frankly, a coach-seat solution,” Bonnick remarks. “We want first-class, which means doing more than just changing out the engine. We’ve hired many of the Kodak engineers involved with these patents and opened IMAX Rochester to work with our Sheridan Park group outside Toronto and Barco.” Currently IMAX employs dual 4K projection, superimposing images over one another with sub-pixel registration for both 2D and 3D.

Ultra-high resolution is cinema’s newest buzzword, but in the large-format world, image quality is much more than pixel counts. “Modular transfer function [MTF] measures image fidelity, which is more than just resolution,” explains Bonnick. “For us, image contrast is king, which is why we are not currently offering 4K product – 4K projectors cannot put out the same level of contrast as 2K projectors. Because our laser development is from the ground up, we’re designing new optics optimizing contrast. Even if we get to where we want to be – with blacks so deep you can’t tell where the image stops and the background begins, you won’t be able to use existing or next-generation projectors with Xenon sources to do what we want to do, because those are cost-sensitive systems sold in massive quantities. We have to illuminate the largest venues in the world, which requires a more robust approach.”

Conventional systems monitor the image out of the projector, whereas the IMAX approach will report on what the viewer gets on-screen. “An industrial-grade camera feeds that data back to the image enhancer within our system,” Bonnick continues, “which ascertains that the brightness levels on both projectors are the same and that contrast and alignment are maintained.”

The company is also on-board with HFR. Bonnick says R&D is ready to upgrade the IMAX system to 60 FPS. “I think as filmmakers become more comfortable with the idea of high frame rate, you’ll see them electing to use it only on certain shots or sequences, perhaps alternating among 24 frames per second and 48 frames per second and 60 frames per second, depending on the scene,” he ventures. “Ultimately, quality of presentation at any frame rate revolves around the success of the immersive experience, and with advances in home theater, we must continue to deepen the cinema experience.”