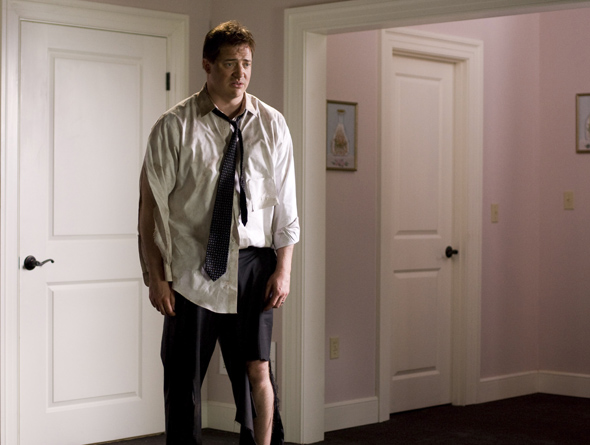 Peter Collister, ASC and friends send in the big RED one for the critters-bite-man comedy, Furry Vengeance

Furry Vengeance offers a storyline sure to warm the hearts of PETA and greenies everywhere: In a last ditch effort to avoid the “paved-paradise-for-a-new-parking-lot” scenario, ala Joni Mitchell’s famous 60’s era anthem Big Yellow Taxi, a plucky raccoon leads a rag tag animal army to halt the destruction of their woodland homes by a real estate developer (Brendan Fraser), who is haplessly caught between loyalties to his job and to his family.

The new creature comedy from Summit Entertainment, which also stars Brooke Shields and Wallace Shawn, is not your grandfather’s HD/VFX movie; it was shot on the RED and the majority of the animal enhancements (by primary vendor Furious FX) were done in 2D, and augmented by old-fashioned aural sound cues (more on that later). The decision to go RED was made early on, influenced by director Roger Kumble’s desire to use real animals (instead of those generated by a computer). And because the band of critters ranged from squirrels to a South African condor with a 7-foot wingspan, cinematographer Peter Lyons Collister, ASC, had no accurate gauge how much footage would be needed to capture the four-legged performances.

RED All About It

“The financiers were nervous it was going to cost a fortune shooting on film, since we were working with non-trainable animals,” Kumble relates. “Summit Entertainment (the studio) had made Knowing with director Alex Proyas on the RED, so they were comfortable shooting digital.” As to placing Collister behind the lens, Kumble says the DP’s experience with both the RED system and animals, made him a perfect fit. (Collister’s credits include Dunston Checks In, Garfield: A Tale of Two Kitties and the recent smash hit Alvin and the Chipmunks.) “We were working with raccoons, squirrels, and other untrained animals, all on a 36-day schedule,” Kumble adds. “So I needed somebody with a great disposition and morale, and Peter is one to lean on.”

The Ohio-born DP’s experience with the RED, in fact, came through a fortunate series of events. As a member of the Directors Guild of America’s Digital Committee, Collister worked with Randal Kleiser assembling show reels for the DGA’s annual Digital Day event, and it was then he realized he needed to know more about HD acquisition. Right around the same time, his agent began receiving commercial job offers for a cinematographer who not only had RED experience, but also owned one.

“It began as a sort of a lark,” he recalls. “I wanted to learn more about digital cinema, and run it through it through my Mac and FinalCut, so I bought a RED camera. Then I did a number of commercials, and the Tracey Ullman show, State of the Union, on the RED. Furry Vengeance is the first feature I’ve done on the RED.

Collister says shooting the animal comedy convinced him of the rig’s value.

“I still believe there are digital cameras that are on a par, if not better than the RED,” he’s quick to add. “The Genesis is a beautiful camera, the F-35 is a phenomenal camera – but as with film, it comes down to what is the story, the sets, the desires of the director, the studio and the cinematographer. And (on Furry Vengeance) we were shooting with real raccoons, otters, crows, which all move very fast, so we really needed high-speed (48 fps) digital capture to slow down their movements.”

Collister says he likes to think of the RED ONE body as a “data system with very good improvements from the different Firmware builds. We shot on Firmware 17, and a little bit at the end with Firmware 20. Now they are on Firmware 21. If you were to ask me about shortfalls on the present RED system, it would be the sensitivity – I’m not upset about the dynamic range. I’d done a number of tests and discovered that the quality image I could get for something that would be (projected) as a film was rating the camera at about 160 ASA and shoot as much in a blue light balance as possible, as opposed to a Tungsten balance.” The DP says he used Cook S4 Primes and Angenieux 24-290 Zooms lenses throughout Furry Vengeance.

Kumble reports that what attracted him to the project was that he didn’t want the animals to talk. “I said let’s go old school,” the director recalls. “We’ll have CG enhancements, but the sound effects and the sounds that we’ll give them would be far funnier than any dialogue. I remember the Jean-Jacques Annaud film The Bear. I don’t know if I read it or heard it on the audio commentary, but they had a five-year old kid do the sounds of the little bear, and you fully understand what the animal is doing.”

Such an approach presented numerous challenges with the second unit shooting most of the live critters in front of a greenscreen so that the main unit could concentrate on getting the actors’ performance without the need for them to wait, for say, a raccoon to hit its mark. [Many of the animal/human encounters are seen split screen, particularly on medium wide profiles.] The crew also employed the use of “Stuffies” lifelike immobile critters made of real fur. Collister would do an over the shoulder shot of the Stuffie on Fraser. If the Stuffie worked, the shot was good. If the shot didn’t work, it would go to visual effects supervisor David Goldberg who has effects credits on The Abyss, Crimson Tide, We Were Soldiers, The League of Extraordinary Gentlemen, and the upcoming HBO miniseries The Pacific and was on hand for all the 2nd unit greenscreen shots.

“Furry Vengeance was not supposed to be a big visual effects movie,” Goldberg smiles. “But we’ve seen that the bigger and broader the expression on the animals, the better the comedy so we’re now pushing 400 visual effects shots, enhancing the expressions of the animal actors.” They take footage of real animals and then animate their eyes and mouths, making them not talk, but appear as if they’re calling out.

The VFX veteran admits he’s riding a fine line, trying to avoid doing a full 3D model of the head of the animal, ala Babe and Charlotte’s Web, where the VFX vendors animated the 3D model and then used the filmed shot of the animal as a texture map on the 3D model, and then filled in the holes. “We were trying to keep it in the 2D realm, where it’s basically blending and warping the manipulations,” Goldberg says. “But when we started the movie there were six shots where the animals had to do certain things. After the first preview, we discovered the audience responded well so everybody wanted to do more. We have kept adding to the point where we’ve now added expressions to three quarters of the shots of the animals! The compositing is being done with NUKE, all the digital enhancements are done in 2D and NUKE, and then the 3D is being done in Maya. Furious FX, our primary vendor has a MAC render farm server set up, so the actual rendering is not done on the laptop or desktop box where you check things.”

Since Furry Vengeance was Goldberg’s first show shot digitally, he sought out tips from a former colleague from Dream Quest Images, Jon Farhat, who had just worked as visual effects supervisor on Book of Eli (ICG January 2010), also shot on the RED. “A lot of people have worked with the RED, but I wanted to talk with someone who had done effects work,” Goldberg says. “I talked with him about greenscreen and bluescreen. Then, we did a lot of greenscreen bluescreen tests with the animals. We knew our screens would be daylight lit rather than lit with color Kinoflos. We did a lot of exposure tests with green versus blue and got a lot of good information from Jon on the best setting for transcoding the files so that we would have the optimum quality for visual effects composite work.”

Brant Fagan, SOC, who operated the B-camera and worked Steadicam, had just finished working with the RED on Doug Liman’s Fair Game. He too became a RED convert. “I love that you can configure it for the job at hand,” Fagan remarks. “You can build it up for Studio, strip it down for Steadicam and handheld, and as long as you have the right pieces of the puzzle you’re going to be happy with the tool at hand.”

Working with animals was also an interesting challenge for the operator (who lives in bear country). He recounts a night shoot involving Cheyenne, a Syrian Grizzly bear and a Porta-Potty! “ “There was set dressing that involved real live blueberry bushes with fruit on the plant. I brought it to the green dressers attention and she went to the animal trainers, ‘Should we get this out of here.’ ‘Oh, no, she’s been fed, she won’t be interested.’ They brought the bear out, hooked her up to a three-foot steel pipe driven into the ground as an anchor, and started setting up her performance. The bear looked down at the stake, swatted at it with her paw and it fell out of the ground like it was made out of Legos instead of steel. Then she ambled over and ate all the blueberries! Nobody got hurt, but it was very amusing.”

A-camera operator John Connell has worked with Collister on a variety of projects for nearly two decades, including the RED-shot State of the Union. Furry Vengeance shot in July and August 2009, north of Boston during one of the wettest seasons in some time. “Fortunately there were a lot of cover sets we could go to,” Connell says. “Everybody was checking their iPhones; OK we got rain coming in ten minutes so we got to get this shot. Then everybody would pack up and run into the house. We had a few sunny days, then the clouds would come in, then the rain, so with the light constantly varying, Peter had to scramble to keep the look consistent.”

Collister agrees that the weather was a major challenge, particularly because much of the film was set in daylight exterior. “Not that every cinematographer hasn’t faced these challenges,” he says. “We’re color timing a scene right now which is what we call the Forest Festival sequence. It’s supposed to take place over 30 minutes on a bright day.  We shot it over a week with 2nd unit coming in at different times in rain, sun and shade. Dave Cole our colorist at Laser Pacific is trying to even it out.

“That varying light, for me as a cinematographer is one of the hardest things. Where you have a day exterior scene, shoot it over a period of a week from dawn till dusk and with a tremendous amount of greenscreen stuff and second unit stuff. It’s why we try and sometimes spend lots of money to silk in an entire street. It’s a struggle. In preproduction it rained every single day. It’s nothing new, but it pains me because you like to think you can control light. It’s all about light and control and quality and when it’s out of your hands, you feel a little … emasculated I guess,” he says with a laugh. Sort of like the animals have taken over the neighborhood.