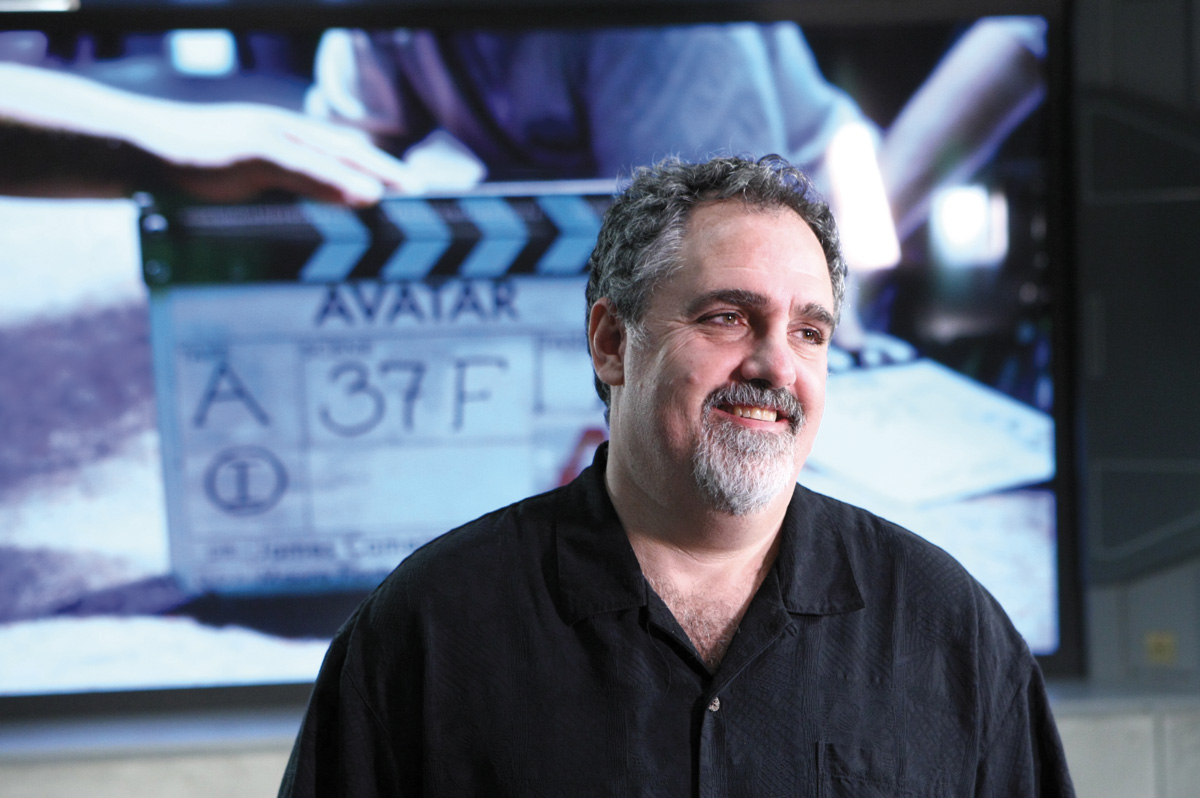 Although producer Jon Landau was born into the Hollywood industry, serendipity still played a role in his career. As COO of James Cameron’s production company Lightstorm Entertainment, Landau produced both Avatar and Titanic. His early career, however, didn’t seem headed in the direction of tent-pole movies. In fact, Landau was raised on the art house hits produced by parents Ely and Edie Landau, which included The Pawnbroker, Long Day’s Journey into Night, and The Man in the Glass Booth. He began as a production manager and in short order rose to be an executive vice president of feature production at Twentieth Century Fox, in the early 1990s. And that’s where the serendipity came in. He was a suit at the West L.A. studio lot when Cameron directed True Lies, and the proverbial “creative sparks” must have flown, because after Landau left Fox, Cameron asked him to join him on a little project called Titanic. “The idea I’d be doing movies like this had never crossed my mind,” Landau says with genuine surprise. “And the fact that I am? I am thrilled.” Debra Kaufman caught up with one of the industry’s most creative producers about the challenges of making Avatar, the new standard-bearer for 3D production around the globe.

Did being a producer on Titanic – another huge, complex movie – prepare you for Avatar? Absolutely.  Avatar for both Jim and myself is a true culmination of all our past experiences, and Titanic is a large part of that. I think it helped in, first of all, developing a working relationship with Jim in a producing/directing capacity; in terms of sitting there and learning how to solve challenges. It’s one thing to think about some of these things, but then you’re faced with the question of how do you want to build the Titanic. Learning how to solve those issues with the rest of the crew in a collaborative way was very much what we had to do here. Looking at what were the challenges and how are we going to solve them. That was a tremendous background to have going into Avatar.

James Cameron has said on a few occasions that all movies should be shot in 3D. Do you agree with this? Absolutely. The analogy I’d make is stereo sound. Why would you do a movie today with mono sound? Stereo sound enhances the audience’s enjoyment of the film. I think it’s the same case here with 3D.

What did you feel it was crucial for you to get up to speed with in order to produce Avatar, especially with regard to the 3D aspect? Did you watch any 3D movies? Talk to any experts in the field? 3D was actually the easiest part of the puzzle. The challenge on Avatar, and why we had to wait to make the movie, was the CG closes-ups of the characters. Movies are about characters and what they do. Up until now, CG characters haven’t been engaging and emotive. We had to wait until we got to a point where we could see into their eyes and their souls. We needed to get the higher fidelity performance and get away from facial marker-based capture. We went with an image-based process where our actors wore a video camera that photographed them. We filmed their faces and then were able to use every pore of their skin as a tracking point to drive what we felt was a higher quality performance.

With regard to the 3D aspect of the movie, I’ve looked at a tremendous amount of material in 3D. What we came to learn and realize is that it’s not about technology – it’s about philosophy. It’s about asking the question, how do we use 3D space? Rather than playing it as a world coming out of a window, we played it as a window into a world. What I had to learn about 3D was the idea that you want to tie convergence and focus together. In my mind, the simplest way to think about it is you want to duplicate human vision. The human eye has to do two things in synch with one another: you have to converge and focus. We had to replicate that with the cameras and the production. We’d also seen a lot of 3D IMAX movies and 3D movies that had been made up until that point. We visited the set of Journey to the Center of the Earth, as well.

What did you learn there? We were able to see that the live capabilities of 3D that existed on the set of Journey to the Center of the Earth were not to the same extent of what we wanted to do. We came up with saying that in our situation, we wanted to use live viewing more. That’s why we created the pod where we had live 3D viewing on the set.

Are the misconceptions about producing a 3D film that you’d like to debunk? Yes! From my standpoint, 3D is not that different. That’s one of the misconceptions. Producing a 3D film only really affects three areas of the production. One is the camera department. Now, instead of a 2D camera, you have a 3D camera. Second, depending on the movie, visual effects impact working in 3D. Three, it’s in the finishing costs. You’re finishing and color correcting two eyes instead of one. Look, can a first time producer produce a film in color instead of black and white? Yes. I don’t think it’s any more difficult.

Really? Other producers have stated an increased percentage much higher than that. Let’s take the example of a $100 million movie, with no visual effects. Let’s say you have $35 million above the line for your stars, cast, script, and all those things. Right off the bat, that’s not affected. Let’s say you then have $65 million below the line, of which your camera budget – and I’m making up numbers here – is $2 million. Of that $2 million, you’re not paying any more to the cinematographer, who is the most expensive person in that department. So, if the portion of the camera department budget that was impacted by 3D came to $500,000, let’s say you double that to $1 million. Adding in the answer printing and color timing, let’s say that’s $250,000.  There are no VFX, so my budget has only gone up only $750,000. Post-production only goes up nominally, as well. You’ll mix in 2D, you score you movie in 2D, you edit in 2D.  The other cost is to finish in 3D and that cost is nominal.

Any other misconceptions about producing a 3D movie that you’d like to dispel? Yes. Another myth about 3D movies is that you can’t do fast cuts. I think we’ve proven that wrong. It depends how you treat it; that’s what digital technology allows you to do. I think another myth is that 3D is only for Part 33 of a series of a movie where the producer is looking for something to make it stand out. 3D filmmaking is not about gags. 3D is about enveloping the audience deeper in your narrative storytelling.

A lot of the push now seems to be 3D for the home as opposed to the movie theatre. What are your thoughts about the 3D TV and the companies that have announced 3D TV channels? I think it’s great for us producers. We need to rely on ancillary markets. As 3D becomes more ubiquitous in the home, it’ll force more 3D films to be made. If you look at the history of films in black and white and in color, you’ll see that there were films shot in color in the 1930s, but color didn’t become ubiquitous in films until the 1960s, when color TVs came out. As 3D TVs come into the home, it’ll force more and more people to make 3D content.

What role will 3D Blu-ray play in furthering 3D filmmaking? Again, 3D Blu-ray, in the near term future, is the optimal way to see 3D movies in the home. We’re in a situation now where it’s chicken or the egg. Is it the content that comes first [or the means to watch that content]? You need the penetration of 3D in the home to do more.

Will it become easier to produce in 3D? Will it become the realm of the independent filmmaker? Absolutely. I think we’ve seen lower budget movies in 3D, like with horror films. As more and more screens are available in the exhibition side, there will be more independent and lower-budget 3D films. Right now, it’s hard for art house theatres to justify playing 3D films. They’re not yet even digital and 3D compatible and it’s hard for them to fight to go 3D. Once again, it’s the chicken and the egg. Ultimately, however, all the theatres will be digital.

What about finding enough people who are savvy enough in 3D to be competent craftsmen on the set and in post? Is there enough of them? I think you can get people up to speed very quickly. We trained people for a couple of days to work in our camera department, and that department did a stupendous job of training people in a short time.

Knowing what a technophile James Cameron is, I’m sure his imagination goes beyond Avatar. What’s the next step, after the 3D feature? First of all, we want to be able to do what we did from a visual effects standpoint for half the amount of time and cost. From an exhibition and consumer standpoint, we’d like to see higher frame rates in the theatres. We’re limited by a100-year-old 24 frames per second technology; a higher frame rate will give a brighter picture, less strobing, and a better in-cinema experience.