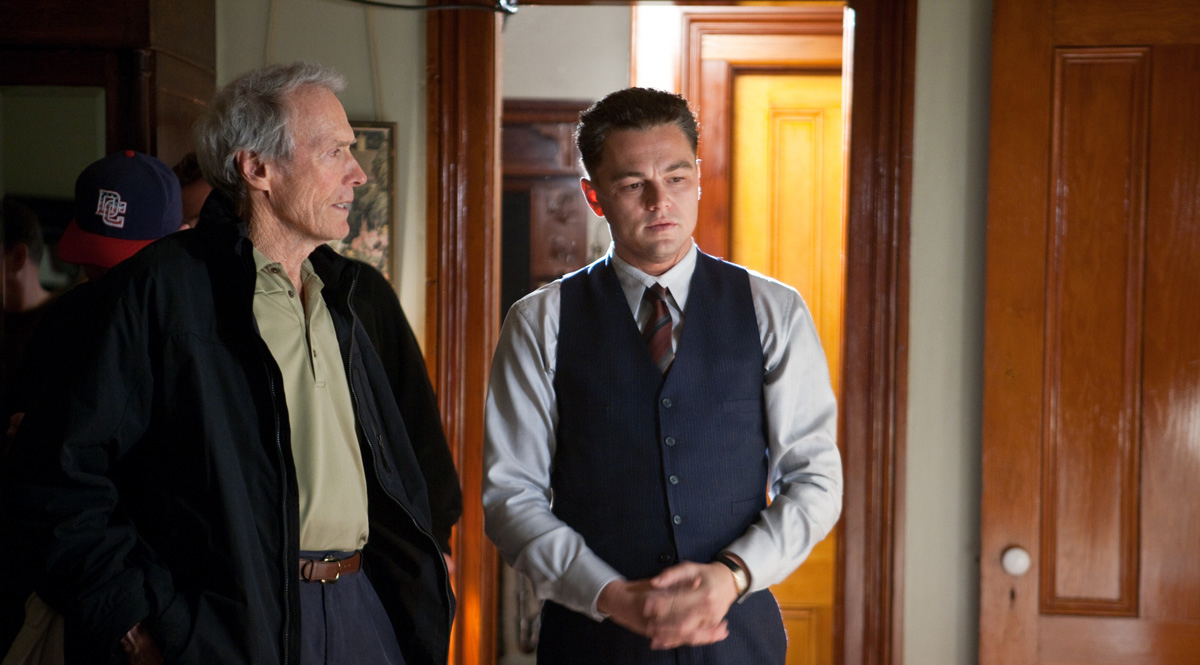 Over the course of winning four Oscars, director/producer/actor Clint Eastwood has built a wide-ranging resume – everything from comedies, thrillers and those famously iconic Westerns, to complex and sophisticated adult dramas. A consummate craftsman, whose career stretches all the way back to the studio contract system, Eastwood appears at ease in any genre he chooses. That’s never been more true than recent non-fiction projects like Invictus, Letters from Iwo Jima, Flags of our Fathers, and his newest, J. Edgar, a biopic about the FBI’s powerful long-standing chief. An “actor’s director,” who always puts his cast first, Eastwood is also famously efficient with schedules and budgets. Many say his ease behind the camera stems from the confidence he places in the collaborators he’s brought along over decades. Or as cinematographer Tom Stern, ASC (now on his seventh Eastwood project) describes the many creative partnerships: “a jazz quintet,” in that Eastwood is the leader, but gives everyone the freedom to contribute with their own particular talents. How fitting that the man who gave us Bird approaches filmmaking as one inspired piece of improvisation, where every single person on the set has a key note to play.

ICG: What was it about J. Edgar Hoover that captured your interest? Clint Eastwood: I liked the script very much. I had grown up with Hoover being the top cop in the country and all that. We didn’t know much about him because we didn’t live in the information age that we live in now. He was always a large figure on the scene. As the years went by you always heard about the controversies, whether or not he was taping people or whatever he was doing. It just seemed like an interesting subject to do. [Dustin] Lance [Black] wrote a really nice script.

You’ve done a number of films based on real individuals or situations. Is there a difference in how you approach nonfiction? If it’s nonfiction you have to be as accurate as possible. You try to recreate it. If you’re doing something like Letters from Iwo Jima, you have to capture elements of the battle as they happened. And the same goes with J. Edgar. Hoover was something of a mystery man; not many people knew much about him. He was a guy who started the FBI at a very young age, then aged with it and built up a bureaucracy that nobody else could fool with. Nobody really knew him except for his pal Clyde Tolson and his secretary Helen Gandy. They’re the only people who were fairly close to him.

In determining the look for an Eastwood film, Tom Stern gave the example from Iwo Jima, of putting post-its on photos from books about World War II in the Pacific theater, and off you guys went to shoot. Yes, we do look at a lot of photos. I was growing up during World War II so I saw just about everything that was printed on it at that time. It’s in your memory very strong. In fact I remember being in a theater when a munitions ship went up in Port Chicago and the whole theater shook. At the same time they were showing Movietone News and cannons were going off on the screen. It was like the first sensaround! Then the theater emptied out because everybody panicked. You just have so many memories of it. [The Port Chicago Naval Magazine explosion occurred on July 17, 1944. 320 sailors and civilians were killed and another 390 were injured.]

How did the relationship between you and Tom develop? We go back many years – to when [cinematographer] Bruce Surtees hired him as a gaffer on my films. Then over the years he continued on with [cinematographer] Jack Green when we did Unforgiven and all those films in the 1990s. I hadn’t hired a DP for Blood Work and he said, you know I think I can get in the Guild. If I can get in the Guild would you ever want to use me as a cinematographer? I said, sure.  I was thinking at the time about trying something new. Jack wasn’t available. And I said, you’re on. He’s been with me ever since.

Is it true that you don’t determine your camera angles until you get to the set? Right. Once in a while we might say, let’s try this for this scene, but we don’t set it in stone. You start a picture and you get there with all the people, somebody’s left handed instead of right handed. OK, let’s do the other side, that kind of thing.

That flexibility is surprising, given the polished look of all your films. To me it’s just a giant improvisation. You have a format. You have a plan, which is the script. Then you pick the best shots. Tom and I will talk about things that weren’t there when we were scouting, so you have to adapt accordingly. It might be beautiful light now, but cloudy when you scouted, so you just go for it. I picked that up from [director] Don Siegel. When something crazy happens that you didn’t plan on, and it’s interesting, you just go ahead and print it.

Tom mentioned a sequence in J. Edgar that’s about two and a half pages of dialogue, and, on the spot you decided to make it a walking scene throughout the entire set. We went through five different sets. It just kind of blended itself into another scene so we just put it from one shot right into the next scene. There were a lot of ways we could have done it, but it seemed like it worked just blending the one into the other. Normally I would cover something like that just in case the tempo isn’t right, or the actors didn’t have the right tempo. But in this case the actors hit the right key so it’s just print it and walk off.

[Operator] Steve Campanelli mentioned another shot of walking backwards down the Capitol steps and his not wanting to rehearse it because he felt if he did, he might not make it back up! [Laughs]. They were very steep steps coming down and he’s going from top to bottom, so it was you might as well get it while you can get it. Steve’s great that way. He can improvise and I give him a lot of freedom on that. I say, if you get to the end of the shot, just keep going. It may be the end of the scene, but it might blend into something else. So let’s see what happens.

[Colorist] Jill Bogdanowicz said she and Tom put together many different looks for J. Edgar, and that for the 1920’s period, you referenced Iwo Jima and Flags of Our Fathers. That’s fairly typical for me: I wanted to give a sample of what [Jill and I] had done together before in terms of the printing. And in this film we’re going from 1919 to the mid-1970s so I just wanted a different look for Leo [DiCaprio] when he’s a 77 year-old-man and when he’s a 22 year-old-kid.

So you use different looks to establish a sense of place? It’ll be subtle. The audience won’t go, “Oh, my gosh he’s doing this.” They shouldn’t be aware of it. It’s not like deep color to black and white, or something. We do have black and white for a film within a film, and we do show a clip from William Wellman’s Public Enemy and that was black and white. But we use subtle steps going back in reality. I started fooling with that approach years ago on Bird. For each different phase of his life, I tried to have a little bit different look.

Roughly 85 percent of this film was shot with just three lenses. Why are you so judicious in the use of close-ups? It seems like, nowadays, a lot of films are shot entirely in close-ups and that doesn’t give you a feeling of the space you’re in. Directors like Walsh and Hawks gave a certain size to a movie.

Your films do hark back to those directors, in that you choose not to force the audience. Well, there are no hard-and-fast rules, and I personally believe there are times for punctuation. Maybe that’s because I was brought up in a time [of moviemaking] where the cinematographers and directors I had studied – people like John Ford and the way he handled Monument Valley exteriors in My Darling Clementine – always got the most out of space. I remember watching a picture, which shall remain nameless, where some guy went out on location for something like nine weeks and he came back and everything was inserts and close-ups. It could have been shot in Burbank! He never captured the expanse of the location. And I thought that’s a silly way to do it. Why waste all that time and money if you’re not going to give the audience the feeling they’re actually in that place?

Any other examples? Bruce Surtees was a great one for that, too. When we did The Outlaw Josey Wales he captured a lot of the area that we were in. We were in about three or four locations on that picture. There was a period in the ‘60s and ‘70s were everybody got into zoom lenses, close-ups and inserts. A lot of that was probably inspired by Sergio Leone and people who knew when to do that. But sometimes people got into it and it became micro shots. You wouldn’t get a feeling of the expanse around it. Sergio knew how to do it and still get a sense of the production value. Billy Wilder, and directors like him, knew how to use the close-up for punctuation.

Sunset Boulevard doesn’t even have a tight close-up until that famous last shot. Exactly. And pictures like Sunset Boulevard still have great resonance. It’s all on sets, but you get a feeling of the size of the building they’re in, the yard and the pools and all that stuff.  The same for Double Indemnity. There’s that great sequence when he [Fred MacMurray] first meets Barbara Stanwyck. She’s at the top of the stairs and they start that dialogue and the inner monologue of what he thinks of her and how he sees her. You could have shot it all in close-ups but it wouldn’t have been half as interesting.

Or half as smoldering! [Laughs] Yeah, when it’s supposed to be smoldering he cuts in there, so it’s nice.